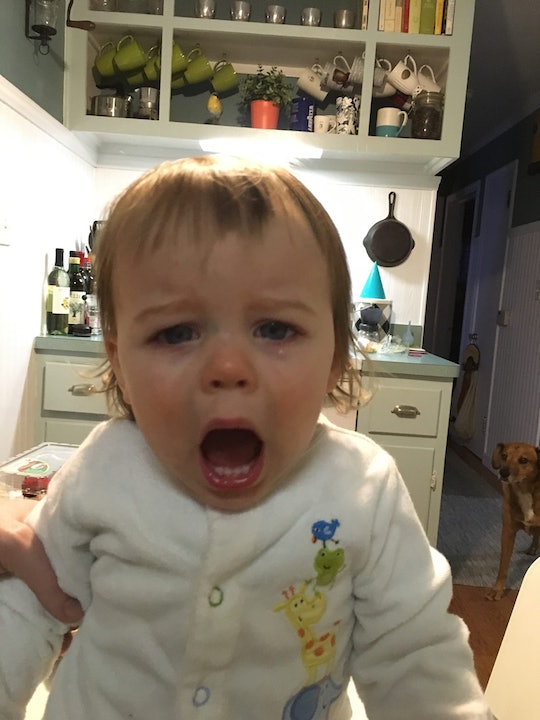 I’m Worried My Kid Will Inherit My Anger Issues

My dad was an angry dude. I remember talking to him as little as possible, because I feared him so much. To me, he he was more like a bomb than a man. At any second, he could turn from quiet to explosive, so standing near him wasn’t worth the risk. But now, I’m the angry one. I am ashamed to say it, but I struggle with controlling my anger. And I am scared that my child will have anger issues when he grows up, too.

For the most part, I am a joyful person. I sing and dance and yell "Whoa!" a lot. I am exuberant, to say the least. But my moods tend to vacillate between two extremes: I am either having the time of my life, or I am at the end of my rope and beyond frustrated. I have nice stretches of time where I exist in between those two poles, and I feel pretty solid, like a strong wind would not have the power to knock me into the path of one of the two. But eventually, I will succumb to my anger, which is a no-win situation. Nothing good can come of it, because everything in the path of my anger burns.

I pray that my son doesn’t pick this up from me. I pray that he doesn't inherit my tendency to scream and cuss and flip on a dime.

My fear that my child will inherit my anger issues has been heightened by recent events. For instance, a few months ago, my child found out about cookies. I am sure he’d had cookies before this, but I think he only recently formed a solid comprehension of just exactly what a cookie was, and he fell in love. Unfortunately, this was around the same time that he formed an understanding of the power of a baby’s demands. All of the sudden, he was willing to stand up and fight for something he wanted. And that something was cookies.

My son's reaction to not immediately getting what he wants is so intense that it embarrasses me.

He started ramping up his use of the word "cookie." He'd throw it out into the morning air as we pulled him from his crib, hoping we’d produce something circular and sweet. He’d say it mid-day and in the evening again, as a suggestion — just to keep the idea fresh in our minds. Sometimes, we gave in and gave him cookies. We didn’t want to create a monster, but we also like cookies ourselves and we know how delicious they are, so we weren’t opposed to introducing that kind of beauty into his life. But now? Do you know how he asks for cookies NOW?? I’m having PTSD merely thinking about it.

Now, when he asks for cookies, he says the word sweetly at first. There’s a lyrical feel to the sound; it’s actually quite pleasing to the ear. But if his request isn’t met with a bowl of cookies perched atop a cushion on a throne, he starts whining "cookie?," and he sounds like an instrument that is severely out of tune. Then he usually has a total meltdown. He opens his mouth and a demon voice falls out, and he raises his brows and stares at you straight on, as if to challenge you to challenge the demon. It is truly terrifying.

My son's reaction to not immediately getting what he wants is so intense that it embarrasses me. If we were in public and he started asking for cookies, I would die of shame. But even when we're in the house alone, it still embarrasses me that his anger is so intense. Like, what part did I play in allowing this behavior to come into existence? Is he a horrible person and is it too late to correct things? Or is he, perhaps, just a toddler?

For the present, I’m hoping that all his demon-ness is simply a result of being a toddler. From what I can gather, toddlers often tend to act like little a-holes across the board. They aren’t capable of true empathy and they maintain severely short levels of patience. So I am holding out hope that this is what’s happening.