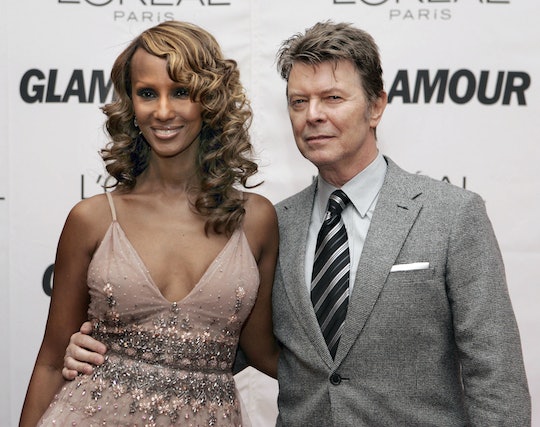 2016 is thankfully over — and while the year brought some good into this world, it also brought a great deal of tragedy. In 2017, the world will experience the anniversaries of those tragedies, bringing back some of the pain people were quick to leave behind in the past, most notably among the families and loved ones of those we lost. One year after the singer's death, wife and model Iman's Instagram of late husband David Bowie brings back all of those emotions and more.

Jan. 10 will mark the one year anniversary of Bowie's death, which shocked fans when it occurred, especially since many did not know that Bowie was sick in the first place. Bowie's legacy is one that has proven to last: His image, music, and his influence on pop culture and modern music has allowed him to remain an icon, even after his death.

Two days before what would have been Bowie's 70th birthday, wife Iman, to whom Bowie was married for 24 years, posted the sweetest "flashback Friday" photo on her Instagram account to honor those memories and her late husband's legacy. In the photo, Iman is seen in an embrace with her late husband, sharing a romantic moment. "#BowieForever," she captioned the photo.

Bowie "died peacefully, surrounded by family" after an "18-month battle with cancer" back in January 2015, according to the BBC. And now, one year later, more information about Bowie's battle with cancer is being released. In the film, David Bowie: The Last Five Years, it was revealed that Bowie "discovered his cancer was terminal just three months before he died," according to The Guardian. In those days before his death, Bowie celebrated his birthday and released his final album Blackstar on the same day, an album which many have since dubbed the perfect swan song. Within two days, Bowie was gone.

"[It's been a] tough year, but I’m holding up," Iman told reporters at designer Tom Ford's New York Fashion Week show last September. Pointing to a gold necklace with the word "David," according to The Telegraph, she said, "I’m wearing this until my death."

Iman's flashback Friday photo brings back a well of emotions, undoubtedly for herself, but also for Bowie's fans and friends, and anyone who took inspiration from his music. On what would be Bowie's 70th birthday, it's the perfect tribute to the life of a music and pop culture legend.