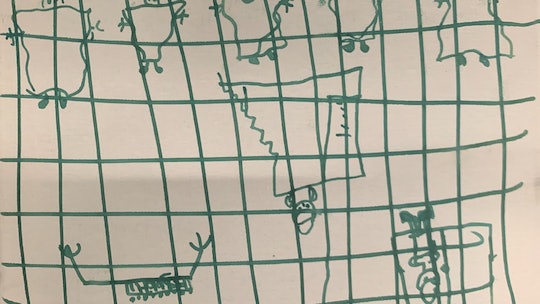 I don't know about you, but this 4th of July was different for me. In light of the ongoing crisis at the U.S.-Mexico border, I couldn't muster an ounce of pride in my country. Yet, our nation celebrated its freedom over the long holiday weekend — with cookouts, parades, fireworks, and a "Salute to America" event in Washington, D.C. — while thousands of migrant children sat in overcrowded detention centers. And as it turns out, immigrant children's drawings of their experiences in detention may end up in the Smithsonian one day.

More Like This
Survey: Just 30% Of Parents Would Get Their Kids Vaccinated Against COVID-19 Right Away
This First-Grader Convinced An Educational App To Add Black Hairstyles To Avatars
Vaccinated People Can Ditch Masks. Where Does That Leave Kids?
Therapist Says: Alone Time For Moms Is A Necessity, Not An Indulgence

In case you missed it, drawings from three migrant children were released on July 3, according to ABC News, when many Americans were busy looking forward to and preparing for the holiday weekend. The kids in question drew the pictures at the Catholic Charities Humanitarian Respite Center in McAllen, Texas, after being released from U.S. Customs and Border Protection (CBP) custody, according to NBC News. While there, they were asked to draw what they saw and experienced while in CBP custody, and the results are simply heartbreaking.

Two of the drawings feature stick-figure children locked away, while other sketches include foil blankets and guards watching the children. But what all of these pictures have in common is devastating, to put it mildly. Yep, you guessed it — each sketch includes drawings of cages.

Romper's request for comment from CBP regarding the drawings was not immediately returned.

Now, there's a new twist to this heartbreaking story, according to The Hill. That's because the Smithsonian’s National Museum of American History reportedly wants to obtain drawings, like the aforementioned sketches, from other migrant children in detention centers. "The museum has a long commitment to telling the complex and complicated history of the United States and to documenting that history as it unfolds," the museum said in a statement to CNN.

And you know what? As horrible as this moment in U.S. history is — and as much as I wish it weren't happening in the first place — I'm actually glad the Smithsonian is seeking out these drawings. And as it turns out, Twitter seems to share my feelings.

One Twitter user wrote, "These expressions from the children as part of American history. For too long we as a country have swept the truth of our sins under the rug. Out of sight out of mind. Instead look only to our victories and not our failures. We need to remember both. This must not be repeated."

Yet another person wrote, "Don't ever let the Republican party forget this, don't ever let an election go by where they don't pay an electoral price for being the party of concentration camps."

Personally, I'm not sure how anyone can proudly wave the American flag while kids are reportedly still being separated from their parents at the border and locked in cages. Citizens should be outraged and disgusted by these concentration camps (yes, these centers are technically concentration camps, per the technical definition), and disappointed that America is apparently allowing history to repeat itself.

As horrifying as this all is, what's happening to children at the U.S.-Mexico border is something Americans need to remember. And, hopefully, the Smithsonian will preserve these heartbreaking sketches illustrated by migrant children who have been ripped away from their families because maybe then the country will finally come together to put an end to this humanitarian crisis once and for all.