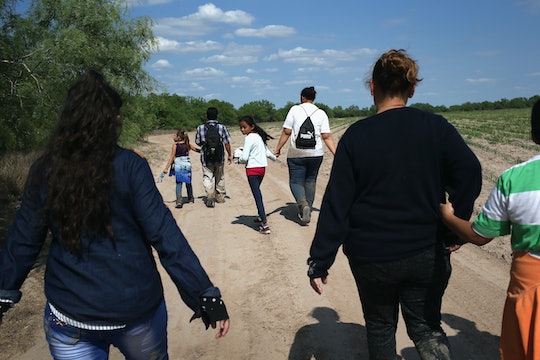 Leading up to the presidential election in November, voters are going to hear a lot about immigration policy from both candidates. But since the speeches will most likely be about building walls, the DREAM Act, or visa processes, it's unlikely that voters will get to hear the candidates' opinions on the handful of detention facilities where Immigration and Customs Enforcement is currently keeping immigrant families while they await due process. Voters probably won't hear about them because they are steeped in controversy. So much controversy that there are 22 immigrant moms staging a hunger strike because they have allegedly been detained for 270-365 days at the Berks Family Residential Center, in Pennsylvania, when the average length of detention is supposed to be just 20 days.

On August 8, Secretary of Homeland Security Jeh Johnson made a statement about the detention centers, saying that ICE officials were ensuring that the average length of stay for families was 20 days or less. But there were 22 mothers who heard him and claim that that's not true at all. They wrote an open letter about their grievances and are on the eighth day of their hunger strike. From there, it gets more complicated.

According to Fusion, ICE officials claim that only 14 women of the 22 letter signers that are still on hunger strike. ICE also, according to Fusion, declined to comment on why the mothers' were being held way past that 20 day average. ICE said:

As of Aug. 15, there are a total of 14 residents considered to be on hunger strike because they have refused to eat for more than 72 hours or have refused nine meals. These residents and others are being actively monitored by ICE Health Service Corps that is on-site at the family center. Due to privacy laws, we are prohibited from discussing specific cases.

But that's all ICE had to say about the open letter in which the women, who are being detained with their children, wrote:

We are already traumatized from our countries of origin. We risked our own lives and those of our children so we could arrive on safe ground. While here our children have considered committing suicide, made desperate from confinement.

Further complicating the hunger strike, aside from ICE not being very transparent about the hunger strike or it's underlying cause, is the fact that these family detention centers don't necessarily have a great track record when it comes to protecting their inmates. In July, the U.S. 9th Circuit Court of Appeals upheld a 2015 district court ruling that said the Obama administration was violating the Flores agreement, which restricts the government from holding children in detention for long periods of time, at the detention centers.

The Berks facility, where the mothers are striking, was the first one of its kind, established in 2001. But there is another one in Texas that was recently shut down due to poor conditions in its medical center. Allegedly, staff at the facility told a mother with broken fingers to "drink more water" and children were reportedly given the wrong vaccines. So even if the striking mothers at the Berks facility are being monitored by ICE staff — it's possible that they aren't getting the right treatment.

The facilities were created to handle the influx of Central American immigrants seeking asylum. The women who signed the open letter last week at Berks all say that they have families and resources waiting for them on the other side of the wall, with "open arms," according to their letter. The women do have legal representation, according to Fusion, but whether or not the Department of Homeland Security and ICE will hear their argument is still unknown.

Until then, there's not a lot to be done except wait. But the next time the candidate of your choice talks about immigration policy, it might be best to pay attention to the gritty details, like moms and their kids on a hunger strike somewhere in Pennsylvania.

More Like This
Ginger Zee Had A Perfect Response After A Troll Asked Her "Who's Raising Your Kids?"
It's A Beautiful Day In Jenny Slate’s Neighborhood
Family Of Grandfather Killed In Highland Park Mass Shooting Say He "Saved" Their Lives
The FDA Is Warning Parents To Not Use Baby Neck Floats After One Infant Died