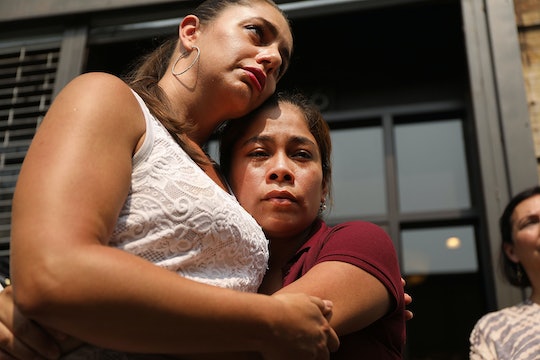 This Is How The Government Is Trying To Reunite Immigrant Families

In the past month or so, one controversial topic has remained in the media spotlight (as it should): the zero tolerance policy for prosecuting illegal immigrants at the Mexico-U.S. border separation and subsequent separation policy of immigrant children from their parents. The separation policy, in particular, has been labeled inhumane —and even as child abuse by some. Although President Trump ultimately called for a end to separating immigrant children from parents — as did a federal judge in California — roughly 2,000 kids who had already been separated and placed in detention centers are remain there, without their parents. Apparently, immigrant parents are being asked to forfeit asylum cases in order to reunite with their children. And it's completely ridiculous.

As NY Magazine reported, the federal government has been taking migrant children separated from their parents at the bord to detention centers across the country and then refusing to release them to relatives in the U.S. unless families pay steep transport fees — and potentially risk deportation themselves. Here's the thing, though: it doesn't even make sense from a financial standpoint. The cost to keep a migrant child at a federal facility costs more than $600 per day; so the government could actually be saving money by dropping these exorbitant transport fees, NY Magazine pointed out.

As The New York Times reported, a Los Angeles construction worker named Marlon Parada was told to pay $1,800 in order to fly his cousin's daughter, Anyi, and an escort from a detention center in Houston to Los Angeles, where he and his family lives. Anyi had been taken from her mother when they attempted to cross the border, and she couldn't be released unless a family member agreed to take her in. "It caught me by surprise when they demanded all that money," Parada told The New York Times. "I asked them to just put her on a bus, but they wouldn’t." Thankfully, Parada was able to gather enough money from friends to wire to the operator of the migrant shelter. But what about families who don't have this ability? As the publication reported, the Office of Refugee Resettlement has stressed these requirements are in place to ensure kids aren't released to traffickers — and that they will be well-cared for in these homes.

Not only are these relatives facing ridiculous transport fees, they're also risking deportation themselves by trying to help the children in their families, NY Magazine reported. Thanks to a new rule, all adults in any household that volunteers to take in a migrant child must submit fingerprints to Immigration and Customs Enforcement, according to the publication. Theoretically, this could deter potential sponsors from coming forward to take in young relatives. Because let's not forget: back in January, the Trump administration revoked the temporary status from hundreds of thousands of legal Central American immigrants, Vox reported.

To make matters worse, migrant parents are being asked to give up their right to seek asylum in the U.S. — as well as their children's right — in order to be reunited with their kids at "reunification and removal facility in Port Isabel, Texas, Vox reported. Of course, parents can certainly refuse this offer, and then they'll have to wait to see their children until their asylum case is adjudicated. Did I mention this can take months and sometimes even years? (Yeah. Not cool.) Let's just say Twitter has a lot of thoughts on the matter. One Twitter user wrote, "False choice is no choice. If you read this right, the only choice is to leave and forfeit your asylum claims forever, if you ever want to see your child again. This is morally repugnant #resist."

Another person tweeted, "If adult migrants agree to forfeit their right (& their kids' right) to seek asylum in the US, then the gov't will reunite them. If they persist in seeking asylum, the gov't will keep them from seeing their kids until their case is final, it could be years. #evil"

Yet another Twitter user chimed in with, "Asylum seekers, by definition, are not illegal. Except the country is now charging them for the MISDEMEANOUR of illegal crossing before validating their asylum claim, and using their children as hostages to have them forfeit their RIGHT to asylum."

Honestly, it's difficult to imagine what parents in this situation are feeling. On one hand, they're desperate to be reunited with their children — who are probably scared and undoubtedly traumatized by the separation in s foreign country. On the other hand, seeking asylum was the reason they came in the first place — to seek a better life for their children. How can you possibly force a parent to choose? Because they certainly shouldn't have to.