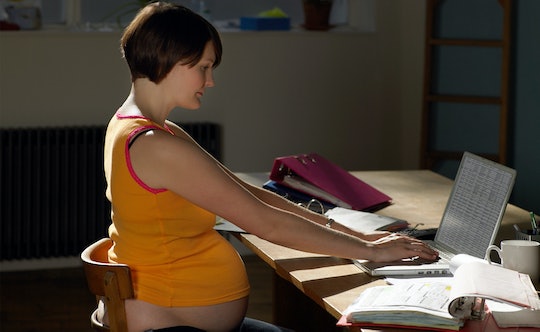 Pregnant Women Can't Get Jobs, & No One Is Doing Anything About It

I was around 19 weeks pregnant with twins when I lost my job. My employers — brothers who both happened to be married with children — told me my "condition" was "too unpredictable" after I spent a week in the hospital for a severe blood infection that put the lives of my unborn twins, as well as my own, in danger. I was stripped of an income, as well as my ability to pay for the health care that was covering my high-risk pregnancy, and I was showing. Pregnancy is a learning experience, to be sure, but realizing how difficult it is for noticeably pregnant women to find jobs in the United States was a lesson I didn't plan on learning during the 40 or so weeks I grew humans inside my body. It speaks to the insidious attacks on women's health that regularly take place in America, and to the relatively overt injustices that women face in the workplace, whether they're pregnant or simply of childbearing age.

According to a report from Pew Research, based on data collected by the United States Census Bureau in 2008, the percentage of women working full-time during pregnancy jumped from 40 percent in the early 1960s to 56 percent in the late aughts. Not only are more women working after they find out they're pregnant, they're also working longer into their pregnancies. The Pew report found that 82 percent of female workers pregnant with their first child continued to go to work until they were within one month of their due date. Meanwhile, according to the National Partnership for Women & Families, nearly 31,000 charges of pregnancy discrimination were filed with the U.S. Equal Employment Opportunity Commission (EEOC) and equivalent state agencies between October 2010 and September 2015.

The Pregnancy Discrimination Act of 1978, while an important piece of legislation, has clearly failed to protect pregnant women from discrimination in the workplace, and has been nearly useless in supporting their attempts to gain employment. According to the law, "a woman cannot be fired, denied a promotion, demoted or forced to stop working because she is or might become pregnant, and employers cannot refuse to hire someone because she is or might become pregnant." But a survey of 500 managers by law firm Slater & Gordon found that 40 percent of managers would "rather employ a man in his 20s or 30s over a woman of the same age for fear of maternity leave."

The same survey found that 40 percent of managers admit to being "generally wary of hiring a woman of childbearing age, while a similar number would be wary of hiring a woman who has already had a child or hiring a mother for a senior role." Forty-four percent claimed the "financial cost to their business, because of maternity leave, was a significant concern."

The timing was such that the pregnancy must have happened right before I moved to start the job. I hadn't tricked anyone, but I still felt like I was somehow being shady.

The "sanctity of motherhood" is touted often in the United States, and invoked as a political signifier by conservative and liberal representatives alike in an attempt to appear more personable, more likable, and more family-friendly to voters. Yet pregnant women are left behind, discounted, and discriminated against on a systemic level.

I would happily give up the elevated "sanctity" of motherhood for equal opportunity in the workplace. The United States is the only industrialized nation without mandatory paid family leave. Currently, there are 49 bills in Congress related to the subject of abortion, many with the intent of telling pregnant women what they can and cannot do with their bodies. And, according to the Equality and Human Rights Commission, maternity-leave discrimination causes 54,000 women to lose their jobs every single year. Taken together, this compromises systemic disenfranchisement; an order in which women with unwanted pregnancies are forced to give birth, and new mothers are not afforded reasonable accommodations inside or outside of the workplace to provide a stable environment for their children. It's a scary landscape to find yourself in.

In March of 2015, five women told Cosmopolitan what it was like to search for jobs when they were pregnant, and their stories mirrored my own in a way that was both comforting and infuriating. It was nice to know that I wasn't alone, and yet I felt guilty for being comforted by the fact that other women have endured the same hardship; angry that there are so many of us. Yoliyy Gamboa was one such woman, and described the general pattern of her job search to Cosmopolitan as follows:

"I did a lot of interviews, and I would always wait until the end to tell them, 'I'm pregnant.' Every time I would mention it, they would hesitate. They'd say they needed people who could be flexible about their schedule and work long hours if need be. I never got any of the jobs."

And then there are women like Claire*, who spoke to Romper via email about her own experience landing her dream job, only to later find out she was pregnant:

"I felt terrible that I had been hired without realizing I was pregnant, even though there's no way I would have known, as the timing was such that it must have happened right before I moved to start the job. I hadn't tricked anyone, but I still felt like I was somehow being shady."

She worried that morning sickness or other symptoms would out her as pregnant before she had a chance to inform her employer. "I was very careful about making sure that the few friends I told knew that the news couldn't be publicly shared on Facebook or anything like that," she says.

Claire's feelings of being "somewhat shady" for securing a job offer while pregnant didn't manifest out of thin air. Recall the sentiment of the men surveyed above, who admitting to feeling "wary" of hiring pregnant women, mothers, and women of childbearing age. Claire's uneasiness is a cognizant affirmation of an unspoken boundary: You don't hire pregnant women. You don't ask for a job while pregnant. These are the parameters we, as a culture, have set and agreed to observe. And women pay the price.

Claire went on to land a permanent position with the company, making her eligible for maternity leave benefits. She was also able to obtain health benefits directly through the company. But her story is far from typical, and Claire makes a point to highlight the unusual nature of her circumstances:

"I feel like they valued me as an employee, and understood and respected my desire to start a family even as I dedicated myself to my career. But above all, I know how lucky I was. I have serious doubts that this is a typical story."

Yes, Claire was lucky, but only because our expectations are so poor for how pregnant workers are treated. This shouldn't be considered "luck." It should be considered normal.

I didn't have paid time off, so I worked a day after I found out one of my twin sons died in utero.

I knew, the moment I was told I was let go that it would be very difficult, if not impossible, to procure employment while I was navigating the struggles of a high-risk pregnancy. So, after a few failed attempts sharing uncomfortable silences with would-be employers who couldn't stop staring at my pregnant belly, I simply stopped looking for work outside the home. Instead, and with the privilege of having a computer, internet access, and a partner with a steady paycheck, I applied for work-from-home positions and attempted to find steady freelance work.

I didn't have paid time off, so I worked a day after I found out one of my twin sons died in utero.

I couldn't afford to lose clients, so I worked from a hospital bed after I was in danger of pre-term labor.

I didn't have paid maternity leave, so I worked the very day I brought my remaining son home from the hospital.

But I did have a somewhat steady stream of income thanks to various freelance jobs. For a pregnant woman in the United States, I was lucky. Because exclusion from the workforce can lead directly to poverty. One-quarter of poverty spells begin with the loss of income, while between 9 and 14 percent begin with an increase in family size, according to research by U.C. Davis.

According to the United Sates Department of Labor, there are over 66 million employed people in the United States. Women comprise 47 percent of the total U.S. labor force, and 73 percent of employed women work on a full-time basis. There are also, as of September 2017, 3.16 million unemployed women in the country. It's safe to assume that employed and unemployed women, alike, will at one time or another find themselves pregnant. And if they choose to continue with their pregnancies, they must undoubtably reckon with their career hopes — whether to combine work life with mom life, transition out of the workplace, or find a job in order to provide a stable environment for their future child.

Women can't sit out their peak career years just in case they get pregnant. Not only would that be life a disservice to them, it would negatively impact our country's economy. According to the National Women's Business Council, if American women didn't work the economy would be about 11 percent smaller. In other words, you need us as much as we need you.

And while a woman isn't required by law to disclose her pregnancy, and it's against state and federal law for potential employers to ask a woman questions about her pregnancy, future family plans, or even marital status, it's clear that finding a job while you're visibly pregnant (and even when you're not) is fraught with bias.

There are so many reasons why pregnant women find themselves on a job search, from being laid off, to finding a better fit, to simply securing financial stability. Accommodating talented workers is a no-brainer. An estimated 31 percent of families with children are dual-income, as it's becoming significantly more difficult to raise a child on one income alone.

If we, as a country, are to achieve true equality, the notion that a pregnant woman is somehow less likely to complete a job task sufficiently, or that a mother is less likely to be as productive as a single woman or man, must be defeated.

As pregnant women, our "conditions" aren't "too unpredictable." We're employable human beings trying to provide for our families.

*Name has been changed to protect the person's identity.

More Like This
7 Things Pregnancy Dreams Can Mean If You're Not Pregnant
Yes, It’s Possible To Get Pregnant If You Have An IUD
Here’s What It Means If You Give Birth During A Solar Eclipse
You'll Feel Like A Princess In These Gorgeous New Year's Eve Maternity Dresses