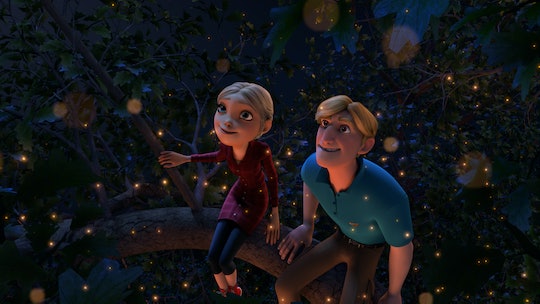 Meet Aja From Netflix's '3Below: Tales Of Arcadia' In This Exclusive Clip

Guillermo del Toro's DreamWorks animated young adult show for Netflix, 3Below: Tales of Arcadia, follows two royal aliens who find themselves in disguise as human teenagers. In addition to all the intergalactic trouble they're dealing with, they have to contend with the normal (and sometimes embarrassing) realities of being a kid. That comes to a head in this exclusive clip. In Guillermo del Toro's 3Below: Tales of Arcadia on Netflix, a teenage alien goes on a date — and it does not go how she expects it to.

When 3Below premieres on Netflix on Dec. 21, Princess Aja Arikidion (voiced by Tatiana Maslany) will find herself experiencing something very typical for teenage girls, but perhaps not as familiar for alien princesses. Her romantic evening out with Steve Palchuk (voiced by Steven Yeun) starts off swimmingly, but then takes a sudden turn. It's the perfect first date until it isn't.

But let's not get ahead of ourselves! When the clip opens, Aja has already climbed into a tree, though she holds out a helping hand so Steve can join her. He's already impressed by her speed, but when she hauls him up onto a branch with ease, he can hardly believe it. "Whoa, you are not like other girls, are you!" he exclaims.

Aja chooses not to respond, instead she continues her rapid upward climb until she reaches the very top of the tree, where she can get the perfect view of the night sky. Steve manages to make it up after her, though with a lot less ease. She asks if the tiny glowing lights surrounding them are stars, but Steve explains that they're fireflies. The real stars are up above.

While she takes in the sky with its massive full moon, Aja remarks that she'd forgotten how vast the universe is. Back home (she is purposefully vague about where "home" is, since Steve has probably never heard of hers), her caretaker used to tell her stories about "beings on other planets." Steve laughs off the existence of aliens, and hopefully Aja enjoys the irony. She says she always thought other people on other planets sounded so adventurous.

Steve begins to point out some key stars, though he is not exactly an astronomy expert. He tells Aja about the "dog star" and the "cat star," as well as the much bigger "elephant star." She playfully accuses him of making it all up. He promises he's telling the truth before he starts to lean in for a kiss. "You're glowing," Steve says, which would be hella romantic if it wasn't literal: Aja's eyes have gone neon blue. Then her hands follow. Panicked, she gives Steve a quick goodbye sniff and just jumps out of the tree, running off before he can react. It's definitely not the most auspicious end to a first date, but who among us hasn't wanted to run off into the night when things went pear-shaped?

Intrigued audience members can find out if Aja arranges a second date when the show premieres on Friday.