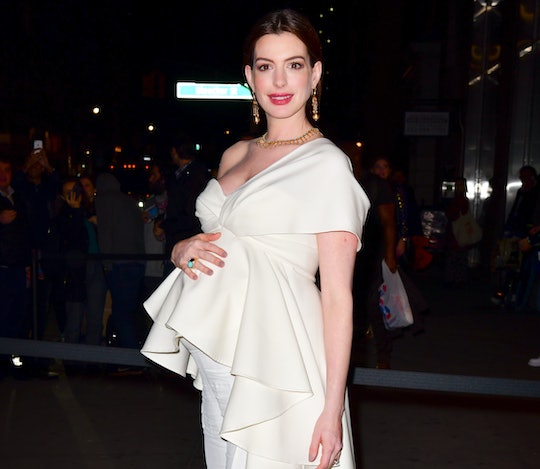 We have known her as a reluctant princess, mom-in-a-hard-place Fantine, and a very sleek Catwoman, and soon she’ll be a mother of two. Now appearing as the character Lexi in Modern Love, Anne Hathaway is constantly reinventing herself. Sitting down with Romper, Hathaway talks about how she (metaphorically) stepped out of her own skin and into that of a single working woman whose crippling bipolar disorder seems set to destroy her life in the show, which is based on the New York Times essay series of the same name.

“I think ableism can really take over in a performance if you don't know what the actual situation is,” Hathaway says of tackling the real-life story of Terri Cheney (“Lexi” in the television adaptation).

Cheney met with Hathaway to discuss her everyday life during the blip of time portrayed in Cheney’s Modern Love essay.

“[Cheney] laid it out for me in such vivid terms. So she really, really helped me,” Hathway says. “I just remember her describing what lifting a spoon felt like when you were in a depressive state and how the day before you could feel like you could do anything and then all of a sudden you can't feed yourself because a spoon just seems impossibly heavy.”

The physical reality of their life is very important to me.

This isn’t the first time Hathaway has portrayed a chronic illness. In 2010’s Love & Other Drugs, Hathaway played Maggie Murdock, a woman living with early onset Parkinson’s disease. The film received mixed reviews at the time, but centered on the love story between Maggie and Jamie (Jake Gyllenhaal), a man desperate to find a way to prevent Maggie’s illness from taking over. The Parkinson’s is very much its own character in the film, and we watch it creep into Maggie’s life by way of several disabling symptoms, including tremors and dizzy spells.

“What I like to do is talk to people who are living with whatever illness or condition I'm portraying and I like to get their real stories,” Hathaway says, adding that she never wants to be “careless” with someone else’s “very real pain” on film. “I like to hear about ... their life,” she says. “The physical reality of their life is very important to me.”

Filming Modern Love wasn’t all dark. As mentioned, Lexi’s “up” side was quite whimsical and even allowed for a musical number — something Hathaway admits she isn’t usually looking for, but still finds fun to do from time to time.

“It’s not something I'm ever like, keep it away from me. I certainly don't have an allergy to it, but it's nice when it shows up. It's fun. I got to go to a dance rehearsal hall and work with a choreographer and show her my three good moves and then she built around it,” she says. “You know, it's funny, dance is such a joyful thing.”

Hathaway was due to welcome her second child any day, and confessed that she’s a huge fan of HBO’s Succession (who isn’t?) — but that she was concerned the series might affect her pregnancy.

“I am so scared that the finale’s going to send me into labor because I cringe so hard every time I watch it that I’m just like, ‘OK, it’s just an hour, baby, it’s just an hour. Don’t misread the signals,’” she jokes.

For what it’s worth, the Succession finale aired on Sunday, Oct. 13, and as far as Romper knows, Hathaway is still pregnant.