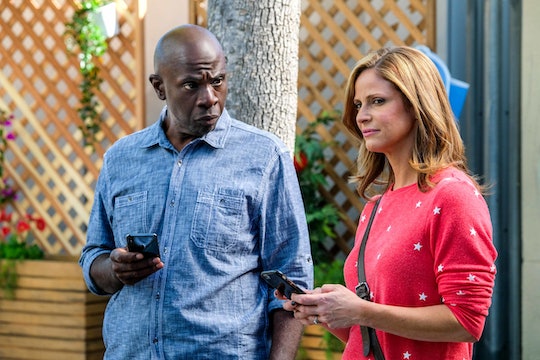 This Exclusive Clip From 'I'm Sorry' Season 2 Is Seriously Funny

Attention: For those not in the know, there’s a new season of one of the my favorite shows headed to TruTV — and I’ve got an exclusive clip from Season 2 of I’m Sorry, featuring the trademark hilarity that made the first season so much fun. For those who haven’t watched any of the Andrea Savage-led comedy yet, run, don’t walk, to Netflix, where you can marathon Season 1 in its entirety. It took me, like, no more than three nights to complete, and I was begging for more.

The premise of I’m Sorry is fairly simple: Andrea Savage (Veep, iZombie) stars as Andrea Warren, a comedy writer living in Los Angeles with her husband, Mike (Tom Everett Scott, who will always be Guy from That Thing You Do to me) and their daughter, Amelia. The title is a phrase the protagonist often has to say, because her particularly dark and dirty brand of humor is a little too much for most of the parents she has to interact with on a daily basis.

In the I’m Sorry Season 1 finale, Andrea and Mike learn that Amelia has been accepted into their top choice school for kindergarten, which, if you know anything about the school system in the LA area, is a huge thing. But just when they think things are going perfectly, they meet her teacher, Mr. Castellotti (Brian Stepanek from Young Sheldon and — yup, he was Arwin on The Suite Life of Zack and Cody, if you can remember that far back) and he’s — well, just watch the clip and you’ll see what I mean.

Unlike the warmer alternative, Amelia’s new teacher isn’t exactly the happy-go-lucky young teacher you usually see occupying elementary school positions. So it will be interesting to see how that works out for Amelia. Either way, you know Andrea will have plenty of jokes to make about him.

The clip also shows that Andrea’s closest dad friend, Brian (comedian and voice actor Gary Anthony Williams) is returning, along with a new mom pal, Beth (Lennon Parham, also from Veep and the upcoming The Goldbergs spinoff, Schooled). Sadly not featured is Judy Greer’s Maureen, presumably because her child isn’t attending the same school. But who knows, maybe she’ll show up in a future episode?

There were so many hilarious recurring and guest stars in Season 1 of I’m Sorry that I couldn’t help but take a look at who is on the docket for Season 2. It looks like Jason Mantzoukas’ Kyle, comedy writing partner of Andrea, will only appear in one episode, sadly. Maybe that means there will be a bit more of a focus on Amelia and their family life, though I personally thought they did a great job showing a balance of that in Season 1. Hopefully, they didn’t change the recipe too much for the sophomore season.