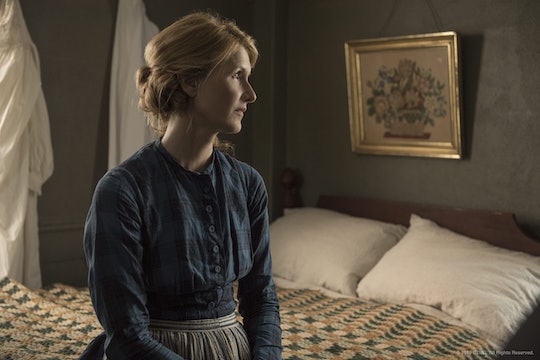 'Little Women' Lets Marmee Get A Bit Angry This Time

No one is as extremely A Mom as Little Women's Marmee. Dressed like the inside of a bread basket, she spends the novel rubbing feet and giving away the family's dinner rolls to poorer neighbors, or otherwise functioning as a kind of welcoming armchair for her four girls; the ur-maternal spirit. Here's how Louisa May Alcott introduces her: as "a stout, motherly lady, with a 'can-I-help-you' look about her which was truly wonderful. She wasn't a particularly handsome person, but mothers are always lovely to their children, and the girls thought the gray cloak and unfashionable bonnet covered the most splendid woman in the world."

But in Greta Gerwig's adaptation, we get just a taste of something more, or a change in the balance of seasonings that affects how we read her. "I am mad every day," Marmee (Laura Dern) tells Jo (Saoirse Ronan), in a reading of a line from the book that takes on greater importance in an adaptation focused on the way a young woman's wings are clipped. Marmee confesses to spending 40 years working on her patience and subduing her lesser angels, Dern's lively eyes signaling a former self who wanted more, who was angrier, who railed against unfair standards, rather than repeatedly counseling her girls to appreciate that other people have it harder (in a scene where she is volunteering, she slips her own scarf into the bundle she hands to a man she learns has given and lost four sons to the war effort).

Marmee's husband is on the front lines of the Civil War, and her sickly daughter Beth (Eliza Scanlen) dies young, but she returns to the house each time with the warmth of a gas lamp. Gerwig gives us a moment as she crosses the threshold of the house, patting away her tears and preparing the face we are used to seeing on Marmee. She likewise filters information about the health of their father through herself, reading his letters aloud on the arm chair, and therefore bearing the weight of any news.

Dern is a master of pathos — no coincidence that Reese Witherspoon cast her as the too-good-for-this-world mother in Wild, whose death is world-ending for Witherspoon's character Cheryl Strayed. But the most wrenching moment in a cinema full of people already racked with wet coughs was the moment that Jo realizes Beth is gone. More so than in the previous adaptation, we feel the loss of Beth and also the acute and discrete pain of her mother the way Gerwig moves from Jo's realization to Marmee's raw grief.

Gerwig knew what she was doing. The director was six months pregnant when the film wrapped, and told Vogue's Chloe Malle, “I was always scared about being a mother ... in terms of what it would mean for what I was able to do.” Thus we have a film that wonders which pieces of Jo might reside in her mother, and which thwarted dreams are bound up under Marmee's even countenance — those of her daughters and of her own. It is a film that gives us an angry mother, and teaches us that perhaps mothers have been quite angry for a while, though we didn't know how to read it. Mothers are always lovely to their children, Alcott wants you to remember, but there's a lot more to them than that.

More Like This
The Morning Rush Is Parenting At Its Most Essential
Sex And Mom Guilt: When I Date Someone New, Am I Cheating On My Kids?
Dr. Jill Biden Just Delivered Some Frank, But Powerful, Advice On Motherhood
Reddit Applauds Mom Of Five Who Stood Her Ground & Left Sleeping Dad Behind