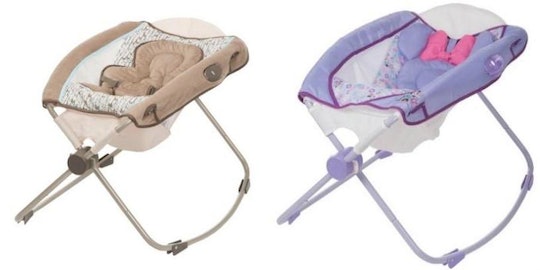 24,000 More Inclined Sleepers Have Been Recalled Due To Safety Concerns

Safety concerns have led authorities to expand a recall on inclined sleepers to include additional products in a precautionary effort to protect babies from injury or death. The United States Consumer Product Safety Commission has announced that two inclined sleepers sold by Disney and Eddie Bauer are being recalled after other inclined sleeper products were reported to have led to infant deaths.

"Infant fatalities have been reported while using other inclined sleep products, after the infants rolled from their back to their stomach or side while unrestrained, or under other circumstances," a recent recall warning on the commission's website read. According to the commission, the latest inclined sleepers to be recalled are the Eddie Bauer Slumber and Soothe Rock Bassinet with model number BT055CSY and Disney's Baby Doze and Dream Bassinet with model number BT071DHS.

While no injuries or deaths have been reported from the use of either the Disney or Eddie Bauer inclined sleepers, the commission warned that, "consumers should immediately stop using the inclined sleepers and contact Dorel for a refund in the form of a $60 voucher."

The latest recall of inclined infant sleepers comes nearly four months after an analysis by Consumer Reports tied 32 sleep-related infant deaths to an inclined sleeper sold by Fisher-Price. Initially, Fisher-Price and the U.S. Consumer Product Safety Commission attempted to address the issue by warning parents and caregivers to discontinue use of the brand's inclined sleeper when infants began to roll over. However, continued criticism from both Consumer Reports and the American Academy of Pediatrics resulted in an approximate 4.7 million Fisher-Price Rock 'n Play Sleepers being recalled by the company in April.

In fact, the American Academy of Pediatrics has gone on the record to say that it "does not recommend inclined sleep products like the Rock ‘n Play, or any other products for sleep that require restraining a baby." They've warned that babies could roll or turn themselves into an unsafe position that leaves them incapable of moving and at risk of strangulation or suffocation.

Parents and caregivers who own one of the recently recalled Dorel inclined sleepers should contact the company for a refund by either calling 877-657-9546 or texting 812-373-6673. Refund vouchers can also be obtained by emailing Dorel at inclinesleeperrecall@djgusa.com or by visiting www.safety1st.com.

More Like This
How Hot Is Too Hot For Babies? Experts Weigh In
Everything Parents Need To Know About Monkeypox
Khloé Kardashian Made A Cute Little Nod To Her Newborn Son With A Tiny Blue Accessory
Priyanka Chopra & Nick Jonas Marked A Fun Summer Milestone With Baby Malti