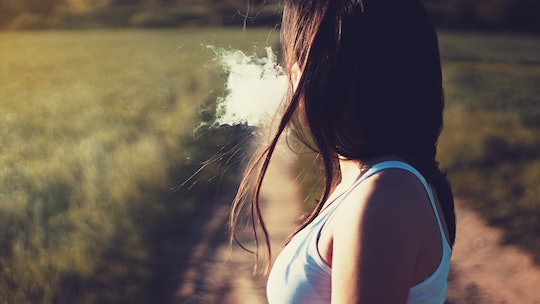 More Pregnant Women With Depression Are Smoking & It's A Concerning Trend

In the United States, one specific demographic has been experiencing an uptick in smoking, and it's a definite cause for concern. New research has revealed increased smoking rates among pregnant women with depression, despite an overall decrease in smoking cigarettes among other groups. Obviously, scientists and medical professionals want to know why this trend is rising, and are thus looking for ways to cut the numbers back down, both for the benefit of pregnant women and for the health of their babies.

This troubling link between depression and smoking actually helps to highlight the root of the problem: Mental health struggles within pregnant women. Socioeconomic status comes quickly into play, too, as these struggles occur most commonly in pregnant women "with lower levels of education, lower income, and who are unmarried." Lead researcher of the study Renee Goodwin, Ph.D., of the Department of Epidemiology, Mailman School of Public Health, told News Medical:

The strength of the relationship between depression and prenatal smoking has increased over time, suggesting that depression is an increasingly important — but rarely treated — barrier to quitting smoking.

So, rather than just prioritize quitting smoking as the end-all-be-all solution, emphasizing ways to treat depression in pregnant women should be a given, too. For many who are suffering from mental illness and an addiction to smoking, this connection between depression, pregnancy, and smoking may not be discovered yet: "Many women may not realize that depression is interfering with their ability to stop smoking and may need extra assistance quitting," Goodwin told News Medical.

In order for long-term health, "treatment for depression in conjunction with smoking cessation efforts may also be the critical component to help women succeed in quitting," Goodwin noted in the same interview. Researchers also advised that education and awareness in vulnerable communities are key to making necessary changes. Smoking cigarettes during pregnancy, according to the Centers for Disease Control and Prevention, can lead to premature birth, birth defects, and even infant death. Still, many aren't able to deal with all of their burdens on their own — familial, medical, and public health support are needed, too.