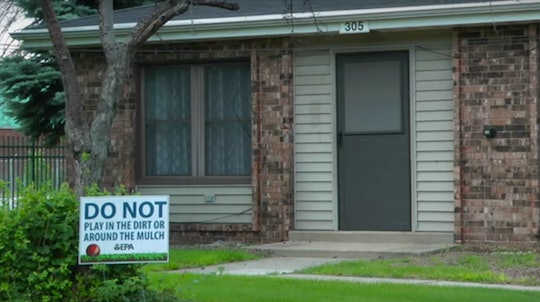 Residents of the West Calumet Housing Complex in East Chicago, Indiana, received horrifying news last month when officials told them they were living on soil contaminated with lead. Now, one mom says the Indiana lead contamination wasn't revealed to her for over a year. The alleged nondisclosure effectively put her children in harm's way for far too long.

Shantel Allen, a mother of five young children, recently learned that the Environmental Protection Agency tested her yard a year and a half ago for lead and arsenic, uncovering that the soil had up to 66 times the limit of lead that it was supposed to have, along with arsenic levels far above what is considered normal. Lead is one of the most harmful substances to children, causing side effects like lower IQ and lower academic achievement, along with issues with fine motor skills and other health problems. And yet somehow, reportedly nobody told Allen about the contaminated soil in which her children regularly played until last month, even though the testing occurred in late 2014. Indiana EPA spokespersons did not immediately return a request for comment.

Now, Allen told CNN, her children allegedly "show all the signs and symptoms of having lead poisoning. They have fevers, chills; they vomit. ... I've taken them to the emergency room a number of times." And her 2-year-old daughter Samira reportedly has a lead level of 33 capillary. The CDC gets really concerned at level 5.

In response to questioning about why the test results took so long to get to parents, the EPA told CNN,

In retrospect, with spikes in the preliminary data, we realize that with increased scrutiny of that initial data it could have triggered action to be taken sooner, instead of having to wait until the data was fully assessed. EPA will institute a process to review preliminary data to flag the need for immediate action.

Allen is not alone. Many residents fear that their children will suffer long-term consequences from the lead. The housing complex is built on a former lead factory, and lies within a Superfund site, which means the EPA has declared it hazardous. It was added to a list of highly contaminated sites in 2009, and yet allegedly no one fully informed the residents of the danger in which they were living, the danger in which they were unwittingly letting their children play.

Now, the West Calumet residents must find somewhere new to live before the city demolishes their complex, which only adds another layer of uncertainty and fear to their lives.

When asked on CNN what she wanted to say to those who failed to warn her of the contamination, Allen stated, referring to the EPA, "How dare you keep this from us and just let our kids play in lead and arsenic soil? How dare you? Shame on you."

Hopefully news of the alleged non-disclosure brings necessary light to yet another troubling situation.