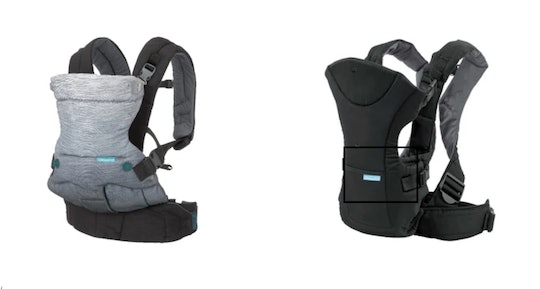 14,000 Baby Carriers Sold At Target & Amazon Have Been Recalled Due To Safety Hazard

Due to a potentially serious safety hazard with the buckle, the U.S. Consumer Product Safety Commission (CPSC) announced on Thursday that Infantino has voluntarily recalled 14,000 baby carriers as a child could fall out of the device.

The Infantino recall, which includes three types of baby carriers, was issued after it was discovered the buckle can break, posing a fall hazard to the child. The carriers included in the recall were sold at Target, Amazon, and other stores nationwide from Nov. 15, 2019 to Dec. 20, 2019, according to the CPSC and Infantino.

"The front facing infant carriers are cotton with a front padded pouch. The carriers have a black body and black straps or a gray body and black straps," the USPC described in the recall notice. Three different models of Infantino carriers, but only with specific lot codes (which are sewn into the inside of the carrier) are included in this recall. Infantino noted on its website that "similar products with different product codes are not affected by this recall."

The following lot code of the Flip Front2back Carrier has been recalled: 2018 0719.

The Up Close Newborn Carrier has been recalled with the following lot number: 2018 0719.

While Romper has reached out to Infantino for further comment, the company states on its website that those who are concerned about the recall can email them at recall@infantino.com or call Infantino at 1-800-840-4916 between 8 a.m. to 4 p.m. PST Monday through Friday with their questions.

The CPSC notes that no injuries have been reported, but customers have been advised to stop using the recalled products. "Consumers should immediately stop using the carrier," Infantino said, "and return it to Infantino to receive a free replacement product."