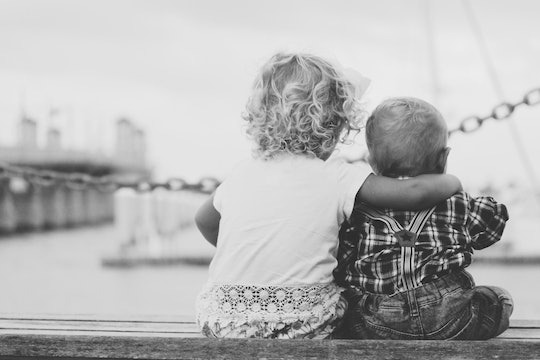 Maybe you've seen the viral photo of two babies, one black and one white, reaching across a literal grocery store aisle to touch fingers. The caption was probably along the lines of, "No one is born racist," or "Babies don't see color," etc. And while this sentiment is nice, and sort of true (in a sense), new research suggest that, contrary to that popular image, infants show racial bias as young as 6 months old — but that doesn't need to be as disheartening as it sounds.

According to two recent studies, infants actually do start relating their own race to positive stimuli, and other races to more negative stimuli. The youngest age this is shown to begin is at 6 months. One of the studies, "Older but not younger infants associate own-race faces with happy music and other-race faces with sad music," looked at babies aged 3 to 9 months old, and found that 6-month-old infants did in fact distinguish between races. The second study, "Infants Rely More on Gaze Cues From Own-Race Than Other-Race Adults for Learning Under Uncertainty," also looked at babies, but at the specific 7-month-old mark, to determine whether they too present forms of racial bias when given the choice between adults of their own race versus adults of another race.

Both studies contend that infants have the ability to prefer one race to another, in various ways. In the first study mentioned, researchers exposed infants to short videos of faces — either their own race or another race — while either happy or sad music played. The results showed that infants 6 months old and up strongly associated happy music with faces of their own race, and sad music with faces of a different race. As the study states, "Infants as young as 6 months can readily extract race-specific information from the faces they are viewing."

In the second study, 7-month-old infants were shown a screen with a person of their own race giving cues as to where to look on the screen. The results were recorded, and then the infants were given the same test with an adult of another race giving the same cues to look at the same places on the screen. Again, this study concluded that, "infants are biased to follow the social cues of own-race individuals over other-race adults under situations of uncertainty."

While these kinds of racial bias are learned behavior, it's evident that parents can work to reduce it by introducing their babies to diverse groups of other children and adults early on.