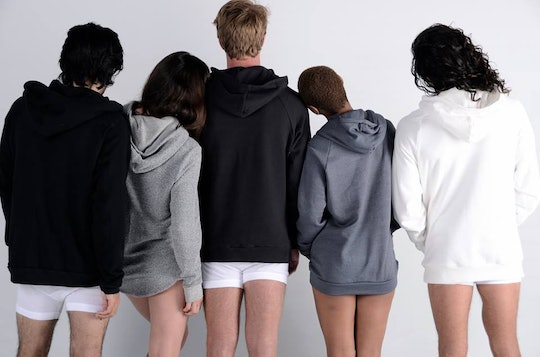 Inflatable Sleep Hoodies Are Here, So You Can Finally Nap Anywhere You Want — PHOTOS

You guys, there are a handful of things I've seen come around since I graduated from college that surely would have changed my entire university life: Tagged photos on Facebook, the Hunger Games saga, Backstreet Boys cruises, and Netflix streaming, to name a few. And then there are these inflatable hoodies for napping. I can't see them without thinking about how epic the library naps between classes could have been. Coulda, shoulda, woulda, right? Learn from my mistakes, current students: Don't graduate until you've exhausted all proper napping options. I'm also excited for those of you who travel often for work, or just in general, shout-out to all you jet-setters out there, because plane travel just changed forever.

Real question: How has it taken society this long to embrace this idea? I mean, naps in community spaces and impromptu naps are a match made in heaven. OK, technically they're more of a "match made on public transportation and on classroom desks," but still. If anyone knows Josh Woodle, the creator of the Hypnos hoodie, please give him a hug for me. And also accept the fact that I'm subtly sending envious vibes because if you know him, that means you have the hoodie hookup and I don't.

The hoodies, which have already destroyed their Kickstarter campaign (it expires on January 11, so you've still got time to contribute should you feel so inclined to make this dream a reality for the undeserving humans of earth), come in various styles for men, women, and kids, are actually super cute, despite what you might picture when you hear the phrase "inflatable sleep hoodie." Is it too early to start compiling next year's Christmas list?