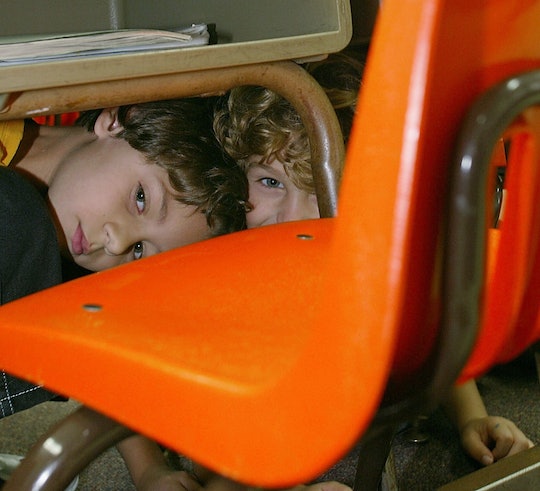 "It’s the world now," Tristan Aguirre, a 17-year-old student at Saugus High School in Santa Clarita, California, told reporters from the New York Times after a school shooting there. And it's a world that U.S. children prepare for with lockdown drills starting at a young age.

More Like This
These 23 Teacher Appreciation Week Instagram Captions Will Show Your Appreciation
What To Do & Say When Your Child Says They Hate School
9 Signs Your Child Is Overheated
18 Best Sand Toys In 2021 For Babies, Toddlers, & Kids

In the elementary school library, there are rules for everything. The tables are color coded; there are times you have to freeze with your hands on your head. When it's time to browse the books, there are these little plastic dividers the librarian, Ms. Smith, (not her real name, because privacy) refers to reverently as shelf guides or something like that. I can't remember exactly.

But I do remember how it makes things feel. It feels safe and comforting to know exactly where you're supposed to be and what you're supposed to be doing there at all times. I felt good as a grown up, just sitting and watching during my volunteer turn with my daughter's fourth-grade class. There was someone in charge and these are her rules. Check.

And just like that the safe feeling was sucked out of the room.

Calmly, and with the same authority she warned about not putting library books in your backpack with a water bottle, Mrs. Smith got to the part about what to do during a lockdown drill.

“We walk to this line and go into the computer lab,” she explained with her hands gesturing along the black tape line running across the carpet to a heavy door with a lock, presumably originally designed to keep computers from being stolen. “Do we run?” she asked the class.

Then a little boy in the back corner, raised his hand with a question. “Are you sure we shouldn't run?” he asked.

“Well, it's a drill — we walk so no one gets hurt,” she explained. “But it's important for you to listen to my instructions, just in case it's ever the real deal.”

I wanted to burst into tears, but Mrs. Smith's strength and grace made me too ashamed to cry.

I imagined this little boy's petrified mother over the kitchen table telling him that if someone ever came into the school with a gun he should run away as fast as he can. I think almost every parent with a kid in school has had a similar conversation.

She repeated the same instructions for the next class of second graders. Seven-year-olds spent part of their first day in the school library worrying that some deranged lunatic armed like a commando would come in and try to kill them.

Then, just like that, they got busy coloring bookmarks with their names and checked out books.

For me, it was a horrifying wake-up call about the reality of the state of gun play in America. For our kids and teachers, it's a way of life. Every day they are forced to worry that a tragedy as devastating as Newtown, Conn., could happen anywhere, at any time, even right here.

Our kids and the teachers we ask to keep them safe are being terrorized by gun violence. It's a steady stream. Something as natural today for our kids in school as asking for the bathroom pass.

I'm asking you to sacrifice your pride, your elected office, your weapons of war, maybe even a few traditions if necessary to help move the country toward a place where our kids don't have to live like this.

The Washington Post recently found that during the 2017-2018 school year, more than 4 million students went through lockdown drills. And research says these drills might be more psychologically damaging than they are helpful. But shouldn't schools do something to prepare for the very worst?

I don't have all the answers, I'm just one of millions of American parents desperate for something better for my baby. I'm grateful to Mrs. Smith and the millions of teachers like her who are able to navigate this scary territory with such bravery, and give their lives if necessary. I wish more than anything she didn't have to.

I am begging, on my hands and knees, for every American to do something. I need you to care about those fourth and second graders in the school library. I'm asking you to sacrifice your pride, your elected office, your weapons of war, maybe even a few traditions if necessary to help move the country toward a place where our kids don't have to live like this. They are being terrorized. We all are.

When it comes to guns in America we need rules. Just like the school library, we need order to this chaos. And we need national leaders who, like Mrs. Smith, are willing to clearly and strongly lay out our path forward to safety.