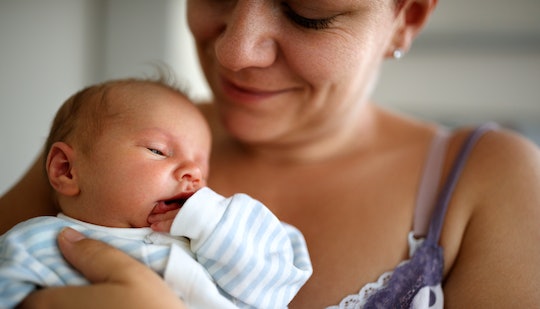 Why We Still Don't Feel Like We Are Enough

I used to get enraged when my mother would talk about how American feminism ruined motherhood. “No one is satisfied anymore. You have a baby and you immediately want something else.” This was funny coming from a woman who, although a successful stay-at-home mom by day, was a musician, and spent most nights in bars, tearing it up on her keyboard. I would argue with her about a woman’s right to selfhood and self-fulfillment, values she herself had instilled in me, and point out that times had changed. It wasn’t 1983 anymore. Very few households could afford to have mom stay at home full-time. “That’s not what I’m talking about,” she would say, then fail to elaborate, which would further enrage me.

Although I’d always known I wanted children, I waited until I was 34 to take the leap and procreate because I wanted a career, too. I was a writer, and had vowed that I wouldn’t have a baby until I’d published my first book. And once I did, I would always find time to write, even if it meant typing with one hand while I used the other to cradle the head of my nursing newborn. I wanted to show my mother that there was no need to choose between motherhood and success.

Then I gave birth to a beautiful, sleep-hating little girl while my novel was in the process of being sold, except that, in the end, it didn’t sell. So here I am, broke even though I work more jobs than I care to count, with my second book on hold because we can’t afford more than part-time daycare (to be honest, we can’t even really afford that). My life often feels like one endless negotiation, both with my toddler and with myself. My desire to spend every waking hour with my not-yet 2-year-old girl is as overwhelming as my desire to write. As overwhelming as the stress of trying to conquer my human limitations and be as present as any stay-at-home mom (SAHM) without sacrificing my identity as an autonomous woman with a successful and fulfilling career. Or even putting it on the back-burner.

It doesn’t matter what choice I make; everything feels like a sacrifice.

The result is constant exhaustion. I stay up too late so I can get work done without losing a precious hour with my daughter. I swallow gallons of guilt for leaving my crying child in a caregiver’s arms two days a week so I can sit in a café and write, or teach bored 18-year-olds how to write. I drink too much wine because it’s the only way I can wind down fast without losing my head from the constant whining and ever-present pile of papers that need to be read. It doesn’t matter what choice I make; everything feels like a sacrifice.

This desire to “be” something beyond just myself is as American as rock and roll and reality TV. We live to work, to pursue individual passions and singular dreams. We also glorify stress, and wear it like a medal of moral honor, something we’ve earned. If you’re not completely overwhelmed, you can’t be doing a great job at anything, especially not mothering.

Giving my daughter unconditional love isn’t enough. I need to expose her to a wide range of cultural experiences, socialize her before she starts school, sign her up for all the right classes, raise her bilingual, and of course, make sure that I myself am a living example of all she can be: an ambitious woman who didn’t have to give up her career to be an exceptional mom. A woman who did it all at once.

As crazy as it sounds, I know I’m not alone. Is this drive to overachieve and distinguish ourselves what we’ve inherited from 20th century feminism? How did we even get here, and is it really where we want to be?

Almost all women have to go back to work soon after having a child, and even those who don’t face incredible pressure to prove their merit by working in the world as well as in the home.

Economics have played as large a role in this as the wins of Civil Rights’ era feminism. In the 1980s and 1990s, many middle-class women had a choice between full-time work and full-time mothering. The choice itself was empowering for many women, thus there was less to prove. My mom was able to spend every day with me and my sisters without quitting her band. America has always moralized wealth, and over the past 30 years, as the middle class has disappeared, we’ve doubled down on the idea, imagining ourselves a meritocracy that rewards the hard-workers, the talented, those who were destined to have all the accoutrements of wealth and to also appear graceful, loving, earthy, unrushed in photos with their children.

In 2018, almost all women have to go back to work soon after having a child, and even those who don’t face incredible pressure to prove their merit by working in the world as well as in the home. We’re American, after all; we prove our worth by our willingness to work ourselves to the point of collapse.

We also live in an era where multitasking is the norm, and everyone is expected to accomplish more, and more, and more. The concept of selfhood and self worth is intimately entangled with the concept of success. Even though we acknowledge how hard it is to be a stay at home mom — try spending a week at home with a toddler, and tell me that’s any less demanding than sitting at a desk or standing in front of a classroom — many women don’t feel adequate “just” being moms.

Somehow, we’ve got it into our heads that if we spend too much time mothering our children, our core selves will decompose, and we will forever be tied to a life of vacuous domesticity. We will wake up one day and realize we are nearing 60, our children are in college, and we no longer know how to fill our days. I’ll be the first to admit that this is one of my biggest fears. So even though I know that pausing in my quest for literary greatness, or whatever other silly validation I’m seeking, won’t erase 36 years of hard work and focus, I can’t press the pause button. What would I be if I weren’t suffering for my art, my child, and my career? I wouldn’t be an American mom, that’s for sure.

I don’t mean to knock the moms who want more. I love the energy and optimism that comes with the full-steam-ahead attitude. I just wonder if my mom isn’t on to something when she reminds me to sit down and just be, and trust that the world and all its complexities will be there whenever I decide to walk back outside.