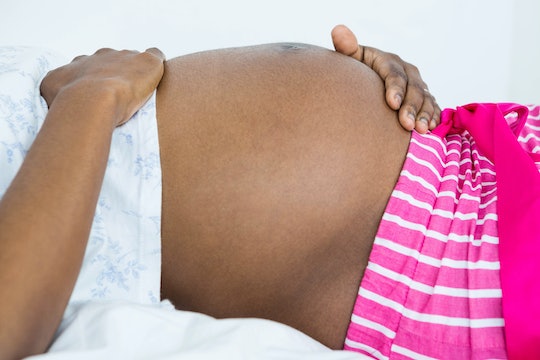 Instagram Mom's Message About Her Postpartum Body Is A Must Read

If I've learned anything from my four pregnancies, it's this: Every body is different. And so is every pregnancy. All four of my bumps were different, and so were all four of my recoveries — and I'm just one person. So it does new moms a huge disservice to compare their pregnant and/or postpartum bodies to that of other women. Yet, society still expects that bump to look a certain way, and for women to "bounce back" almost immediately after giving birth. It's completely unrealistic and unhealthy. Which is why this Instagram mom's message about her postpartum body is a must read.

You might remember the name Hannah Polites because on June 5, the Australian mom of two posted an honest AF image on Instagram. As Babyology reported, it featured a side-by-side comparison of herself pregnant with her second child and then a day after giving birth to him. “38 weeks pregnant/24hrs post birth,” she captioned the post. “Although a little confronting for me, I want to be as real as possible with you all and share my postpartum body journey exactly how it is.”

Polites went on to share that she's in no hurry to "bounce back" and instead will be focusing on her family, newborn son, and not exercising for at least six weeks. "Evaliah has already asked why mama’s belly button 'looks funny' and why my skin on my belly is so soft and she now knows that it’s because my body created a beautiful life and that’s bloody incredible," Polites wrote.

Well, it the 28-year-old midwife and former model is back with another empowering side-by-side image for her followers, People reported. On Sunday, June 16, she took to Instagram to share a side-by-side of herself at 38 weeks pregnant and now at 13 days postpartum.

"The body is so amazing 😳🙌🏻👶🏼," Polites declared. "Cannot believe how much more I popped with this baby compared to my pregnancy with Evaliah. I would get comments everywhere I went about how big I was and 'am I sure there’s not two in there?!' 🤭🤪" She went on to share that baby number two ended up being nearly 1 pound bigger than his big sister at birth — but still within the range of what's considered average. Polites continued:

Luckily, I don’t let the comments worry me as I knew my body wouldn’t grow a baby it couldn’t handle 💖 I’m still not fitting most of my pre-baby clothes so wearing the same things on repeat, just wanted to show you my honest #postpartum 👶🏼💙✨

On the flip side, Polites was repeatedly shamed for her bump being "too small" during her first pregnancy. “It’s truly shocking to read some of the comments regarding my health and that of my unborn baby, especially at a time where women are particularly vulnerable and can be more sensitive to bullying,” she told the Gold Coast Bulletin. "For the record, doctors have told me bub is healthy."

So yeah. Apparently, women can't win no matter how big their bumps are or aren't.

Although it seems Polites has been able to rise above the rude commentary about her body, it isn't always easy to do. My belly was impressive large when I was pregnant with my fourth child — so much so, that strangers felt the need to comment on it. I got the ever-annoying, "Is it twins?" more than once. And it pissed me off every single time.

The bottom line? Don't comment on a pregnant woman's body, unless you're saying, "Oh, you look great!" And please, please please, don't feel pressured to fit into your pre-pregnancy clothes two seconds after giving birth. Your body just created and delivered a human being — and it takes time for that amazing body to recover.