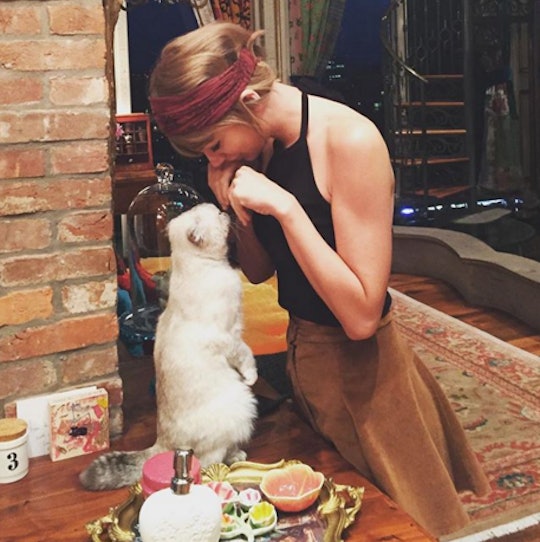 What is possibly the ultimate social media ranking is here: Instagram released its 10 most popular posts of 2015 this week, and all of the most-liked photos were from female users. That's pretty rad, right? Except for one thing: there's a lack of diversity on this list that's problematic. Taylor Swift is Instagram's most popular user (with 55.4 million followers), so I guess it's no surprise that half of the list belongs to T-Swizzle. The most liked photo belongs to another one of the social network's heavy hitters, Kendall Jenner. Sister Kylie Jenner also made the list, with an awesome graduation picture, and so did Selena Gomez with a pic looking cute; Beyoncé graced it posing with Blue Ivy. Pictures of Tay Tay as the girl next door with a squad that slays (and her cat) round out the top 10.

Look, I love that women who are celebrities and teen idols are getting credit for being themselves. But this list also points to the need for more diverse role models, and I'm talking especially in terms of occupation, gender expression, and body type. The list is mostly white, all straight, and hews pretty closely to one specific body, gender, and general appearance ideal. Also, except for the picture of Kylie Jenner holding up her high school diploma and Beyoncé cradling her daughter in her arms, the women in these photos aren't doing much. There's nothing wrong with that! Amen to a good selfie, and maintaining a certain physical appearance is a strategic marketing choice in which these women invest a lot of time and effort. I get that a lot of doing has gone into these photos. But, I also would love to see us all liking images of a more diverse spectrum of women navigating the world in other ways. How's that for next year's #squadgoals? Here are the 10 most liked Instagram photos of 2015, plus 10 more women equally worth of following and liking in 2016: