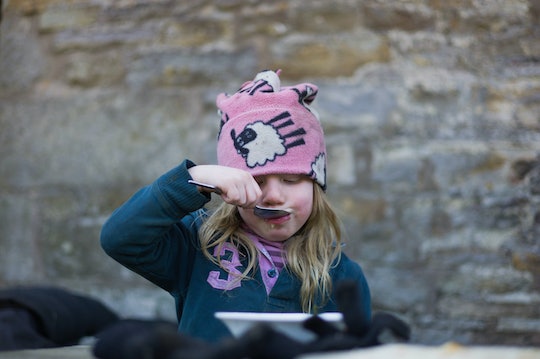 The world's fist instant noodle product, Nissin Foods' Chicken Ramen, launched in 1958, as reported by Nippon. Since then, instant soups have seen rising popularity across the world. Before the more recent ramen trend, ramen in the United States was often seen as an easy meal, especially if you were running on a tight budget.

What makes instant noodles so easy is there's not a lot to them. You heat up some water, pour it into a container, and after a couple minutes, you're good to go! This makes instant noodles a popular snack selection for kids, who are capable of preparing the dish quickly on their own. That ease and convenience, though, may be part of the problem.

A new study, the findings from which will be presented at an American Academy of Pediatrics conference, found that approximately 9,500 kids ages 4 through 12 are sent to the emergency room with burns from soup annually, as reported by Popular Science. To put that into perspective, it's about 1 out of every 5 pediatric burns.

Soup burns might seem trivial and some people may be tempted to blame parents. After all, plenty of people managed to grow up slurping down instant noodles without burning themselves, so what's causing the problem now?

In 2006, a researcher at UC Davis dove into why prepackaged soups are a regular cause of injury. What he found should be pretty obvious: instant soup containers are typically taller than they are wide, which makes it easy for them to topple over, as outlined by the study's abstract.

"Simple redesigning of instant soup packaging with a wider base and shorter height, along with the requirement for warnings about the risks of burns would reduce the frequency of soup burns," the study's abstracted noted.

A 2008 study on pediatric burns came to a similar conclusion, after noting that 51 percent of kids treated were using the microwave to heat something when they burned themselves. According to the study, 65 percent of all burns were from pre-packaged soup.

A change in container design is absolutely necessary, but it's also important that parents re-evaluate how they look at microwaves. That's not saying parents need to be extremely afraid of them, but remember that microwaves can make both the container and its contents scalding hot.

To promote microwave safety, there are a couple of easy steps for parents to take. Children's National Health System, Dr. Joanna Cohen, MD, and registered dietitian Megan Barna, MS, RD, LD, suggested emphasizing the use of potholders when removing contents from the microwave and teaching kids to let food stand before digging in to ensure that the heat has time to evenly distribute.

Kids can be clumsy and that's definitely not their fault. Spills are going to happen, but when it comes to instant soups, there's a lot of preventative work that can be done ahead of time.

More Like This
David Harbour Transforms Into A Santa No Kid Wants To See In 'Violent Night'
20 Stocking Stuffers For Kids Under $20
101 Advent Calendar Activities, From Books To Read To Cookies To Bake
13 Brilliant Gifts For Kids Obsessed With Music — Especially Singing Very Loudly