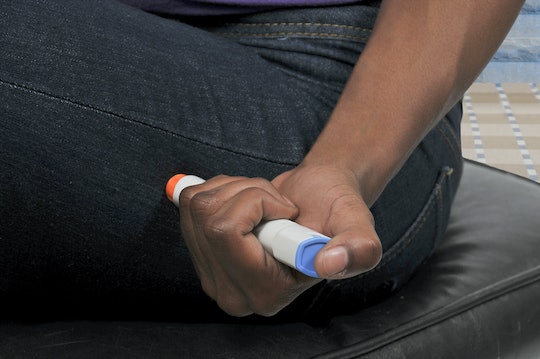 An EpiPen can save a life. The epinephrine injector is used when someone is having a severe allergic reaction, or going into anaphylaxis, but have recently increased in cost. But one state has taken action to help families with this burden. Announced today, Aug. 14, insurance companies must cover kids' EpiPen injectors in the state of Illinois thanks to a new law signed into act by Gov. JB Pritzker.

Come Jan. 1, 2020, insurance companies must provide coverage for epinephrine injectors, or EpiPens, for people under the age of 18. It's that simple. If kids are on their parents insurance, then they will get the coverage that they need. Illinois is the first state in the nation to require insurance companies to cover EpiPens, according to CNN, and this is, understandably, a big deal for countless families.

Allergies impact many children as they are the sixth leading cause of chronic illness in the United States, according to the Asthma and Allergy Foundation of America. Additionally, the cost of EpiPens have continued to rise; in 2007, an EpiPen reportedly cost $57, but cost about $500 in 2016, according to USA Today. For those born with life threatening allergies, this is frustrating, especially since it is recommended that kids carry two EpiPens on them in case of an emergency. But Illinois' new law can hopefully help alleviate some parents' worries as well as a financial burden.

Illinois State Sen. Julie Morrison cited this as a reason for sponsoring the bill. "With steady increases in food allergies and other serious allergic conditions, families are relying on EpiPens more than ever before," Morrison said in a statement. "We should be doing everything we can to expand access to affordable life saving drugs and medicines. No child should be without an epinephrine injector because they cannot afford one."

Pritzker wrote in a tweet on Tuesday that signing the legislation takes "a big step" in protecting children and their families. "Lowering the cost of prescription drugs and expanding health care coverage is one important way to help lower costs and build a higher standard of living for all Illinoisans," he said.

EpiPen will not be completely free in Illinois for parents with kids under the age of 18. According to Gizmodo, this new law means that parents will still have to pay for it under their insurance policy, but they won't have to pay the current list price for it, which is around $600. Still, this is progress, especially since there was an EpiPen shortage in Illinois last year that had parents scrambling to get their children the medication they needed, according to the Chicago Tribune.

EpiPens are essential for people who live with serious allergies. If someone goes into anaphylaxis, a serious allergic reaction that can result in severe vomiting or swelling, an EpiPen can reverse the symptoms, according to the Illinois Department of Public Health. So while this law won't make EpiPens totally free for kids, it will significantly reduce the cost of this life-saving medication, making it more affordable and accessible for parents in the state who have kids with allergies.

More Like This
Banana Boat Sunscreen Has Recalled Products That Were Found To Contain Benzene
New York Can End Religious Exemptions to Vaccine Mandates, Says A Federal Appeals Court
Everything Parents Need To Know About Monkeypox
How To Avoid & Treat Lyme Disease