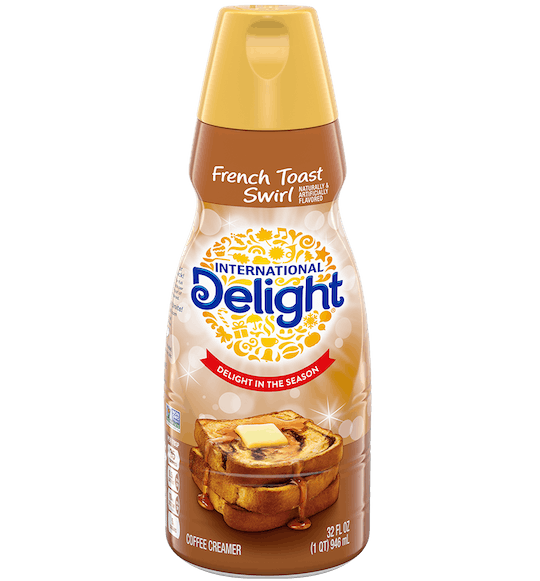 Mornings Are Cray, So Combine Breakfast & Coffee With This French Toast Swirl Creamer

I am among the legions of people worldwide who consume vast quantities of coffee every single day of their lives. But with routine can come monotony. Same cup, same brew, same everything, day after day. Occasionally, you might want something different, something special. That's where International Delight creamers come in. With their bold flavors and unique combinations, you never have to suffer the fate of a boring cup of joe. In fact, you can basically have brunch in your mug every morning because International Delights has a new French Toast Swirl coffee creamer.

French toast is one of the finest flavors of breakfast foods in my opinion, and frankly, I'm disappointed in myself that I never thought to combine the flavors in my favorite coffee. That no longer matters thanks to International Delight, who took all the yummy goodness of French Toast and created the perfect coffee creamer. Notes of butter, cinnamon, and maple syrup mix in a creamy blend that is sure to be a fan favorite.

Step aside, pumpkin spice, because maple and cinnamon are here to slay your hot or iced coffee. Or maybe join forces like some super-powered creamer full of magical coffee happiness. I'm sure we can all use a bit of super-powered coffee now and again.

Living in New York State, all things maple are very popular. You can't hit up a farmer's market or grocery store without finding some new and awesome maple syrup candy or quick bread. Why not take their products as inspiration, and use this creamer to make a bread pudding, or to replace the cream in a pound cake recipe? Even better, why not get truly meta and make french toast with this french toast swirl creamer?

Where I think it would be particularly amazing as an ingredient is in jelly donut dough. Traditional Jewish sufganiyot calls for milk and sugar, but this would add a little something extra. By the way, you don't have to be Jewish to make and adore sufganiyot. You just have to like jelly donuts, so basically, you just have to be human with the ability to eat and taste.

Because International Delight French Toast Swirl coffee creamer is available this July across the United States from retailers like Fairway, Hy-Vee, and Publix — at just $3.79 for suggested retail — my hope is that the cafes in these stores will start offering it as an option in their coffee. I'd really appreciate being able to walk around my grocery store, on those rare occasions that my children aren't with me, strutting like a queen with my fancy breakfast-flavored brew. I've been a mom for a long time and I have a tween — coffee really is my love language at this point.

As a team mom for my daughter's soccer club, I not only bring healthy treats and water for all the kids on my daughter's soccer team, but I often bring coffee for the parents as well. Those early November mornings are no joke here in the northeast. I'm willing to bet more than a few moms and dads would love the addition of the International Delight French Toast Swirl between bouts of yelling "Offside" and "That's going to leave a mark." We're really pretty chill after we have our coffee, though... mostly. (But that one parent on the other side who is always entirely too perky at 7 a.m. can buy their own International Delight. Just saying.)

For under $4, you can tune out everything else for just a few, precious moments, inhale the smell of butter and cinnamon, and pretend that life doesn't make you wake up at zero dark o'clock every Saturday morning. It might work.