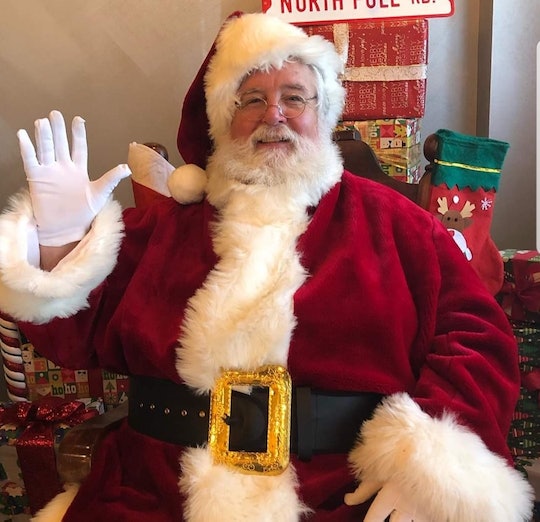 We Asked Santa The Hard Questions About His Job

Santa is used to getting recognized in public. “I have adults come up to me and tell me how much I look like Santa Claus,” says Ray Kozara, 64, who also goes by Old Saint Nick. “You also have people that just look at you [and] want to say something, but they don't,” he says. “It’s hysterical, it really is. I get a big kick out of it.”

Kozara, a father of two himself, has fond memories of dressing up as Santa when his children were young. But it wasn’t until four years ago, when Kozara turned 60, that he began to work as a professional Santa, after friends and family alike decided that his fluffy platinum beard and upbeat energy made him perfect for the job. In putting on the suit again, he seemingly became who he already was.

It was clear he had the look, had good face, had the "X factor," and after some encouragement from those close to him, Kozara decided to give the big leagues a shot.

His first evening wasn’t what you’d first expect. If Macy’s is the Harvard of Santadom, Kozara started out with an undercover turn at the Tulane of holiday venues — a liquor store that one of his friends owned — bringing that jolly spirit to a holiday party. He was a hit and soon after, Kozara was hooked, going on to book many more Santa gigs, and eventually roping his wife Sheila into performing as his helper elf (Sheila, too, became who she already was).

They make you melt. And not only the kids! The mommies and daddies get all excited. And they want to sit on Santa's lap and it's unbelievable.

As his reputation grew within his community, more and more people began to book him for their parties and events. Kozara says that he often sees many of the same children every year as they come back especially to see him.

“It's amazing to see how you touch the lives of these little kids,” Kozara says. “They make you melt. And not only the kids! The mommies and daddies get all excited. And they want to sit on Santa's lap and it's unbelievable.”

“My favorite part is making the kids happy. It just gives me fulfillment,” he explains, both on and off the job — Kozara resembles Santa so much that he’s often approached in public and asked (by both children and adults) if he’s the Big Guy.

Out of respect for the red suit, and those who have worn the red suit before him, Kozara has to ensure he’s in a proper Santa mood when he gets dressed, preparing himself mentally for whatever lies ahead. Whether it’s screaming children or kids with weird gift requests — which yes, he’s gotten a few of — Kozara never knows who will be sitting on his lap that day. What he does know is the responsibility that comes with playing the famed gift-giver.

“If the kid doesn't want to come to me, I tell them to just let them go sit down, have breakfast and wait.” (Kozara often works restaurants.) “And I will go over to them during the course of the morning to see if I can get around with them, high five them or something and sit next to them at the table rather than sitting in my chair, which might be intimidating to them. And then we can get some candid shots at the table with the parents and with the child.”

Capturing the magic is what he’s good at, Kozara says. “I had 280 kids this past weekend at a breakfast, and there were maybe two that I didn’t get a good picture with."

Turns out, he's just as excited to have his photo taken with kids as they are with him: “That’s what a lot of people like about me as a Santa Claus; I go the extra yard to try and get that picture.”

Kozara's loving demeanor is what sets him apart from other Santas and why he’s developed a great reputation over the past four years for his work. In that time, he’s also learned what can make the process easier, whether it’s being flexible to help children get that perfect shot or giving parents tips on how to make the process smoother.

For instance, Kozara tells parents to stay close when the children are on his lap. He’s 64, after all, and not always up-to-date with the latest toys. Kids can also speak in low voices or quickly due to nerves, so having the parents close by helps to ensure they heard exactly what their child wants, just in case Kozara missed it.

As expected, Kozara’s favorite part about being Santa is the joy he sees on the faces of every child he talks to. He recalls one experience that has stuck with him, when a young girl with leukemia came to sit on his lap, put her fingers through his beard and said, “Oh, Santa! You have a real beard!”

Four years down, and Kozara sees no stopping in sight to his Santa adventures. In true Christmas spirit, he ended our phone call with a “Ho, ho, ho!” and I can honestly say that I am better for it.

More Like This
15 Fun & Historical 4th Of July Facts To Share With Your Kids
Here's How To Explain Fourth Of July To Your Kid
Can You Light Fireworks In Your Backyard?
Festive Fourth of July Sparkler Crafts