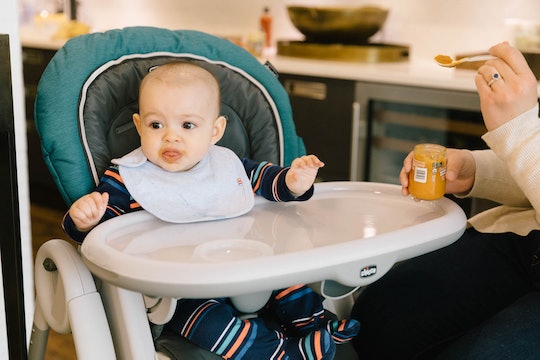 Who would have thought the 5Ws and one H of middle school would come in handy as you navigate this thing called parenting? Not this mama. But the truth is, the who, what, where, when, why, and how of your youth simply cannot better define the onslaught of questions that come from the moment you become a parent. Things like, how do I get my baby to sleep? Or is there a wrong time to introduce solids? As for the latter, I have answers: Here's how introducing solids to your baby too early can affect them later in life.

“For breastfed babies, we recommend waiting until 6 months before introducing solids," Dr. S. Daniel Ganjian, pediatrician at Providence Saint John’s Health Center in Santa Monica, California, tells Romper. "For formula fed babies, we introduce solids at 4 months old. The reason we wait two extra months for breastfed kids is that breast milk is so nutritious that we want the child to get as many vitamins and antibodies from mother's milk as possible."

Dr. Gina Posner, a pediatrician at MemorialCare Orange Coast Medical Center in Fountain Valley, California, agrees, adding that part of the reason for the wait time is that babies still have a tongue thrust reflex which causes them to push the food out of their mouth. "They can also aspirate on the food," Posner tells Romper in an email interview. "Introducing too early can also lead to an increased risk of obesity. It can also upset their belly since it is not ready for food yet."

In addition to the dangerous risks involved in feeding a baby too early, Steve Scheetz, author of the forthcoming Homemade Baby Food: Developing Smarter, Healthier, Non-Picky Eaters and owner of Moonbow Baby, says the long-term effects are just as troublesome.

"Prior to 4 months old, a baby’s gut has not yet matured enough to have the proper enzymes and bacteria to break down food properly, which can cause them to not absorb the necessary nutrients," Scheetz says. "This can lead to fat deposition and intestinal inflammation. Those are science-y terms to mean feeding your baby solid foods too early can lead to obesity and type 2 diabetes later in life."

Ganjian notes that it's also important to wait to give children honey — no earlier than 1 year old — because of the risk for botulism, and also avoid cows’ milk before the age of 1 because a baby's kidneys cannot process it correctly.

"We used to say avoid giving highly allergic foods like nut products and seafood products until the child was older, but the latest research has shown that the earlier introduction of such foods can actually decrease the chances of developing allergies later on in life," Ganjian says. "The one exception is if someone in the immediate family has severe anaphylaxis to those foods, then ask your pediatrician when it is safe to introduce the foods."

Ganjian says the order of introduction to foods is first baby cereals, then vegetables, then meat purée, and, lastly, fruits. "The reason being is that some kids like the sweet taste of fruits and refuse to try anything new that is not as sweet," he says. "If fruits are introduced last, it is less likely for your child to develop this sugar addiction."

Molly Mills, a registered nurse and International Board Certified Lactation Consultant (IBCLC) says it's also important to keep in mind that the first few months of starting solids should be about tastes and textures, not quantity. "We lose track of this when we have jars or packets to finish, or if we are spoon-feeding at our pace rather than baby's pace," she says. "This is where we can unintentionally override babies' natural cues for hunger and satiety, which can affect them later in life."

Mills says this is an opportunity for parents to reframe how they think about starting solids, instead thinking of it as a way to help babies get used to the process and ritual of eating, like exploring tastes and textures, or stopping when they're full. "The focus can then remain on being responsive when it comes to feeding and eating, and we can teach our babies to be more in tune with their feelings of hunger and satisfaction, which sets up good eating habits throughout life.”

And keep in mind: Questions are a part of this whole parenting thing. So, if you have them, then don't be afraid to ask the right healthcare professionals for their expertise.