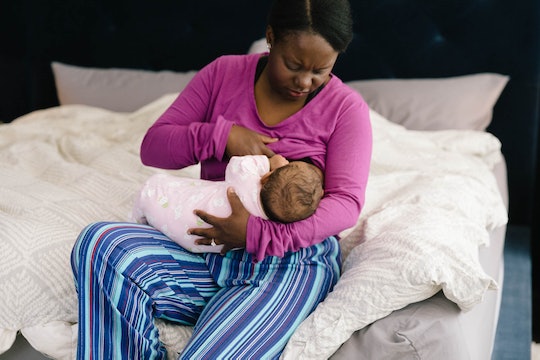 These New Breastfeeding Guidelines Will Seriously Piss You Off

The benefits of breast milk are largely well-known in the United States, and many women intend to breastfeed their babies after they are born. In fact, the well-meaning notion that "breast is best" has become so pervasive that mothers who are unable to breastfeed their babies often struggle with feelings of guilt or shame. But new UNICEF data shows exclusive breastfeeding rates throughout the world are still far lower than the recommendations set out by the World Health Organization, according to Reuters, and that the failure to support mothers can actually lead to serious consequences for maternal and infant health — particularly in developing countries. But, in addition to the health impacts, not investing in breastfeeding is just bad business policy.

The new report released Tuesday in collaboration with the Global Breastfeeding Collective looked at breastfeeding data from 194 countries, and found that only 40 percent of infants are exclusively breastfed from birth to six months. What's more is that only 23 countries currently have rates of exclusive breastfeeding above 60 percent, and the United States is not one of them. Although the the majority of new mothers in the United States breastfeed their babies after birth— more than 80 percent, according to the Centers for Disease Control — by the time their babies are six months old, only about half have stuck with it, despite the fact that the American Academy of Pediatrics recommends mothers breastfeed their babies at least for the first year. And that's only the national average: in some states, like Mississippi and West Virginia, breastfeeding rates at six months are less than 30 percent.

While those lower numbers are concerning — and are likely indicative of a lack of continued support for breastfeeding mothers in the United States — the UNICEF report notes that the issue can literally be one of life or death in developing nations, where breastmilk can provide infants with protection against common causes of infant death like pneumonia and diarrhea. In fact, WHO Director-General Dr. Tedros Adhanom Ghebreyesus said that parents should really view breastmilk as "a baby's first vaccine," given that it both protects them from both preventable disease and malnutrition.

But the benefits aren't just for baby: according to Science Daily, a 2016 study published in The Lancet found that mothers who exclusively breastfeed their babies have a lower risk for ovarian and breast cancers as well as diabetes. In fact, researchers estimated that the benefits of breastfeeding to women are such that "increasing breastfeeding to near-universal levels for infants and young children," could actually prevent about 20,000 deaths from breast cancer each year.

Though exclusive breastfeeding might be primarily viewed as a women's issue or a public health issue, the UNICEF report argues that governments need to realize that it's really an economic one as well. Describing breastfeeding as "one of the smartest investments a country can make," the report found that every dollar spent on enabling and encouraging breastfeeding is estimated to yield about $35 in an economic return. And not supporting breastfeeding can have a big effect: according to UNICEF, low breastfeeding rates in China, India, Nigeria, Mexico, and Indonesia lead to a total financial loss of about $119 billion each year, thanks to health care costs, the impact of increased mortality, and "cognitive losses," due to inadequate breastfeeding.

The takeaway, it seems, is that it is in virtually every country's best interest to support and encourage women to breastfeed their babies as much as possible, and really, to support and invest in mothers in general. That means increasing parents' awareness and understanding of the value of breastfeeding and breastmilk, particularly in countries where it can have a life-saving effect, according to UNICEF, as well as regulating marketing practices for baby formula. But it also means supporting breastfeeding-friendly workplace policies, and implementing paid family leave — two areas in which the United States definitely seems to be falling behind.

For one, there's the fact that paid maternity leave isn't guaranteed to American mothers: according to Forbes, the United States is one of only two countries that doesn't federally mandate paid maternity leave, and while the law allows for up to 12 weeks of unpaid leave under the Family Medical Leave Act, more than 40 percent of workers don't even qualify for it. In fact, according to a report by PL+US, as many as 1 in 4 American mothers return to work only 10 days after their babies are born.

That's horrifying for many reasons, but it also works against breastfeeding in a major way. According to a 2011 study in Pediatrics, the longer a woman can stay home with her baby, the longer she is likely to breastfeed. And while many moms do attempt to continue breastfeeding after they've returned to work by pumping milk, it's definitely not easy, or even always accessible.

Though the Affordable Care Act mandates that employers are required to provide breastfeeding mothers breaks and a private space (that isn't a bathroom) in which they can pump breast milk for up to a year after their children's births, it doesn't always work out that way: according to the National Conference of State Legislatures, employers can opt out if doing so would "impose undue hardship," or if they have fewer than 50 employees. And that says nothing, of course, to whether or not female employees feel like they would be supported by their employers to pump on the job even if the law says they can.

While the currently reality might be frustrating, it also sounds like a lot of progress can be still made. Most importantly though, it appears that any progress has the potential to make a significant impact. Though breastfeeding may not normally be something that seems like an important economic issue, the UNICEF report makes a good case for why it should be viewed that way. And hopefully it will be a message that resonates with policymakers.