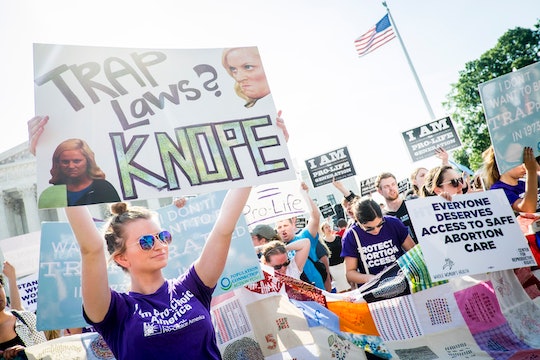 On Friday morning, Gov. Terry Branstad signed Senate File 471 into law, banning abortions after 20 weeks in Iowa, and requiring a 72-hour waiting period on legal abortions. Less than two hours later, according to The Des Moines Register, Justice David Wiggins of the Iowa Supreme Court issued a temporary injunction on the waiting period, but the 20-week ban still stands. The law allows for exceptions if the life or health of the mother is determined to be at risk, but there is no exception for cases of rape, incest, or fetal anomaly, even when the anomaly is incompatible with life.

Planned Parenthood of the Heartland and the American Civil Liberties Union of Iowa sought an injunction on Thursday, before Branstad enacted the law, but the request was denied by Judge Jeffrey Farrell of the Polk County District Court. Friday's appeal to the Supreme Court was a success, but it's only temporary; Iowa Attorney General Tom Miller must deliver a response to the court by noon on Monday, at which time Wiggins will consider whether to keep or lift the injunction. Last month, Miller's name was included on a brief signed by 16 attorneys general urging a federal judge to overturn a restrictive anti-abortion law in Ohio. He also declined to investigate Planned Parenthood in 2015, despite Republican pressure, after a series of hoax videos claimed (falsely) that the clinic was selling fetal remains.

According to the Guttmacher Institute, 43 states currently ban abortion after a certain point in the pregnancy, with 17 banning it at 20 weeks. But those laws aren't preventing much; only about 1 percent of abortions are performed after 20 weeks. Women don't have late-term abortions because they were too lazy to get around to it earlier; they need them because something went tragically wrong with a wanted pregnancy, and if they don't terminate, they'll either die, miscarry, or give birth to a child who will know nothing but unspeakable suffering. All states with abortion restrictions provide exceptions to save the mother's life, so all these laws really do is stop a woman from preventing her baby's pain.

According to the Kaiser Family Foundation, 24 U.S. states require waiting periods before obtaining an abortion, ranging from 18 to 72 hours. Of those, 14 states also require an in-person counseling session before the abortion, meaning that patients must make two visits to the clinic, which creates an undue burden on women who need to take time off of work, arrange for child care, pay for travel, and in the case of some rural areas, even hotel accommodations. Waiting periods also don't prevent abortion; studies have shown that women who obtain abortions are sure of their decision. All waiting periods really do is drive patients to other states, increase the rate of second-trimester abortions, and punish women unfairly for a completely legal medical procedure. Iowa's new law benefits nobody.