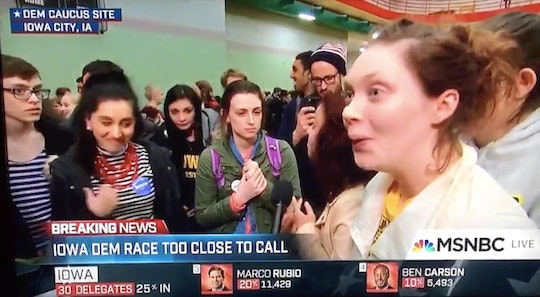 A veteran speaking to MSNBC reporters on Monday night dropped an f-bomb during her Iowa caucus interview on live television. Not shockingly, the masses immediately began freaking out on Twitter. She said that she is "concerned," because she hasn't "gotten benefits because the VA is so f-ed up." But she really said the whole entire word. Her friend standing next to her looks almost as shocked as Twitter reacted.

The young female vet was really passionate about her cause and, hey, this is live television. Sometimes mistakes are made. Democracy isn't always pretty, right? Almost immediately, anchor Brian Williams hopped on an apology. He deadpanned, as he does, "A bit of French that snuck in on our English translation." How cute right? Twitter too thought it was pretty hysterical. One social media user wrote, "Hey, @MSNBC, we're adults and you're on cable. We can handle the occasional #FBomb. No need to apologize."

Mistakes happen. But mistakes happen more often when it's live television. Especially on a caucus night when newsrooms are buzzing and every reporter and producer is trying to get the news up first. MSNBC wasn't the only network to slip up. Over on Fox News, the font displaying the candidates names were a little too close for comfort. It looked like the former Secretary of State's last name was spelled without an "L" and with a "U" instead of an "I."

Honest mistakes happen all the time, right? Unfortunately, the candidate's name was spelled wrong throughout most of the night. Whoops.

Already, the young veteran with a potty mouth is gaining a following on Twitter.

Elections and caucus nights are notorious for being the bane of every journalist's existence — but also sort of fun. Live coverage can get crazy and you never know what can happen. But this woman's potty mouth might have driven some attention toward the network during the caucus, which is sometimes worth a little grumbling from the FCC.