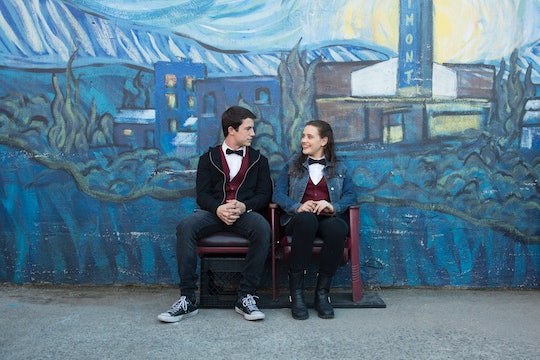 Few new or returning Netflix shows of 2017 have been as hyped as 13 Reasons Why. The show (premiering March 31) tells the story of Hannah Baker, a student who committed suicide under mysterious circumstances, and Clay Jensen, the shy boy who had a crush on her and the one to whom Hannah leaves a collection of 13 cassette tapes, addressed to the 13 different people who played a part in her decision to end her life. But is this story an original Netflix creation, or is 13 Reasons Why based on a book?

13 Reasons Why is based on a bestseller of the same name (stylized TH1RTEEN R3ASONS WHY). The book is a young adult novel published in 2007 and written by Jay Asher. According to a 2009 New York Times write-up, the book "was partly inspired by a relative of Mr. Asher’s who had tried to commit suicide [...] The idea of using tape recordings, he said, came from a visit to a casino in Las Vegas, where Mr. Asher used a recorded audio guide on a tour of an exhibition about King Tutankhamen of Egypt."

Asher is closely tied to the TV project, even recently releasing a movie tie-in edition of the novel, complete with photos from the upcoming show and interviews the writer did with the cast and crew as well.

Initially, the book was in development as a feature film as Universal, with Selena Gomez to star. According to Variety, the story is something of a passion project for Gomez, who, after reading the book, brought it to Anonymous Content (along with her mother and a producer) to be adapted for the screen. With the jump to Netflix, Gomez is no longer starring (newcomer Katherine Langford portrays Hannah), but she is serving as an executive producer.

For the singer-actress (who has had her own mental health struggles), the book's messages and themes (dealing with depression, suicide, teen bullying, and other tough subjects) was a vital one to get out to kids. "I was going through a really difficult time when they started production,” Gomez told Deadline. "I went away for 90 days and talked with a lot of kids. It definitely hit home, a very important part of me. Kids have to see something that’s frightening, I want them to understand I definitely relate to everything. I was a mess."

Clearly, this is a very important show, and hopefully it'll get the attention it should.