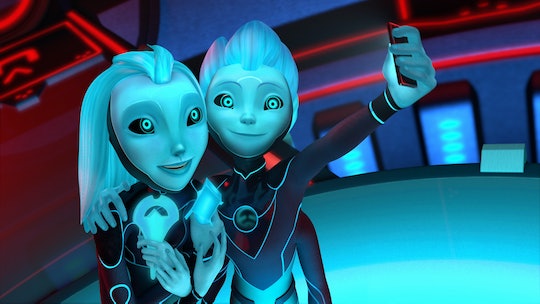 Following the success of Netflix animated series Trollhunters: Tales of Arcadia, it was announced that series creator Guillermo del Toro would extend the story into a television trilogy. But parents who still have certain grisly imagery from del Toro's 2006 film Pan's Labyrinth permanently seared into their imaginations may be wondering: Is 3Below appropriate for kids under 10? While del Toro brings his signature visual flair to the series, it is geared towards kids. Netflix gave its predecessor Trollhunters an ages 9+ rating, while the official info for 3Below says it's appropriate for kids ages 7 and up.

Common Sense Media agreed with the rating, while parent reviews suggested it was an ages 11+ movie, and kids said it was suitable for ages 10+. Trollhunters contained scares including scenes of "trolls fighting, snarling, and in peril," which might be too scary for younger kids, according to Common Sense Media. But other parents suggested that it was a good series to watch as a family, just not for littler kids to watch alone.

The story definitely contains villains and so some of the animation is more sinister when those characters and they havoc they wreak pop up on screen. But the series is perfectly appropriate for tweens, especially considering that its heroes are a pair of teenage alien siblings.

But 3Below has plenty of appeal for adults who choose to tune in with their kids, too. Fans of del Toro's elaborate visual storytelling will appreciate the cinematically beautiful series, and it was considered a big enough deal to have the teaser trailer and its cast revealed at New York Comic Con before the show's premiere. The cast includes plenty of voices TV fans will recognize, too. Orphan Black's Tatiana Maslany, for example, plays the leading sister, Aja while Diego Luna (Narcos: Mexico) returns as Krel. Emmy Award winners Ann Dowd (The Handmaid's Tale), Uzo Aduba (Orange Is The New Black), and Glenn Close (Damages) also lend their voices to the series. This is not including other huge names like Nick Offerman, Alfred Molina, Cheryl Hines, Emile Hirsch, and Kelsey Grammar who all have voice roles, too.

The official Netflix description of the show reads:

3Below is the story of a teenage girl, a Latino boy, and an old man who just happen to be aliens. With their home planet torn apart by Civil War, Princess Aja Tarron and Prince Krel Tarron will find themselves marooned on the most backwater, primitive world in the galaxy: Earth. The three take on human guises to conceal their alien form as they search for a safe passage back to their home planet, but while searching, they develop a real affection for Earth and its inhabitants. This series ultimately asks the simple yet complex question: “What is home?”

Another aspect of the show that may appeal to adults but fly over kids' heads are the political undertones. For one, the teen aliens go undercover on Earth as beings humans will consider "invisible": a girl, a Latino, and a senior citizen. And in its second season, 3Below tackles militant xenophobia even more overtly with the introduction of Colonel Kubritz, who is out to get Aja and Krel and will stop at nothing to win.

So while the show may be too scary for very little kids, it certainly has something to attract the whole family.

3Below: Tales of Arcadia is now streaming on Netflix.

More Like This
Kim Kardashian Stars In Hilarious House Of The Dragon Parody, The Targashians
Lifelong Teacher Dr. Jill Biden Loves Watching Abbott Elementary Too
10 Parenting Lessons From Abbott Elementary That You'll Want To Write Down
'Workin’ Moms' Season 7 Is Reportedly In The Works! Here’s Everything We Know

This article was originally published on Dec. 21, 2018