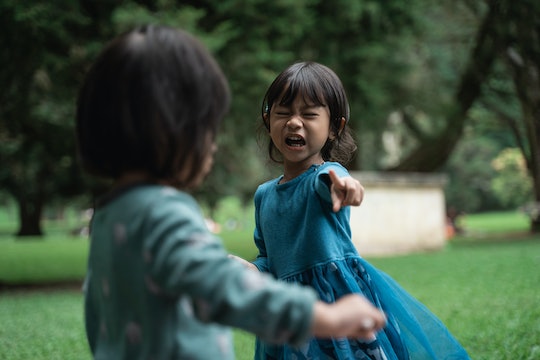 Can You Blame A Bad Temper On Your DNA? Maybe, Maybe Not

If your earliest memories revolve around watching your parents screaming at each other and you grow up to have a bit of a hot temper yourself, you might wonder: Is a bad temper hereditary? It's the classic question of nature vs. nurture. Are you just repeating patterns that you've seen, or is there something genetic happening?

"The research on anger is scarce compared to anxiety and depression," anger researcher Professor Thomas DiBlasi of St. Joseph's College tells Romper. Depression and anxiety get far more research grants than anger, so evaluating and composing meta-analyses are tricky. "For every one article published on anger there are seven on anxiety and 10 on depression," he adds. However, DiBlasi says some studies report that genes influence a person's anger around 50% of the time, "whereas several twin studies report genes account for 20 to 35% of anger."

That's a pretty big discrepancy, but it's not surprising given the dearth of studies on the subject. When research is available, it tends to be gender specific. For instance, a 2007 study from the University of Pittsburgh looked at over 500 women to determine whether or not specific genetic markers could be indicators of angry or aggressive behavioral types. "Researchers found that those who had one or both of two alterations in the promoter region of the serotonin receptor 2C gene were more likely to score lower on two common tests for anger, hostility and aggression," Science Daily reported.

I know that sounds like a lot of gobbledygook, but in layman's terms, the research is saying that if you're a woman, and you have these few ticks on your genetic chart, you're more likely to have a tendency to anger quickly and to respond aggressively. But genetics are just one part of the equation. There is the other side of the nature/nurture debate. Our environments, and the way in which we are raised, and the ways we choose to live, have a real impact on how we react.

Psychotherapist Haley Neidich tells Romper that while she isn't sold on the fact that anger is genetic, she does concede that "you may see this proclivity run in a family."

"Children often mimic the coping mechanisms that they see their parents utilizing as parents are a child's greatest teacher," she says. "Meaning, the way I saw my grandparents and others in my family act with one another likely — even if subconsciously — influences how I react when in a stressful situation with loved ones. Neidich says that "individuals raised by parents who have poor regulation of their emotions are likely to have trouble controlling their emotions as well."

I definitely see this in my children. They blow up over the same things I would blow up over — and I hate it. It's something I'm actively trying to change with the help of my therapist. There has been a lot of deep soul searching, and we're spending a lot of time examining what it meant to be a child in my household growing up. And while I don't spank my children as I was spanked as a child, I am a yeller. It's my not-so-secret-anymore shame. Thankfully, research supports the idea that therapy and anger management does, in fact, work, so even if temper is hereditary, there is something I can do about my own, before I fall too far down this rabbit hole.

University of Pittsburgh Schools of the Health Sciences. "Anger and Aggression in Women: Blame It On Genetics." ScienceDaily. ScienceDaily, March 10, 2007, www.sciencedaily.com/releases/2007/03/070309103136.htm