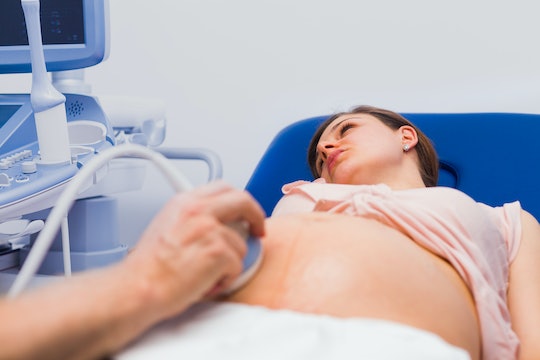 The phrase "your baby is breech" is one no mom wants to hear. Although most people know having a breech pregnancy is not an ideal situation, the details of why and how babies become breech are not necessarily common knowledge. But, despite the initial reaction of terror, is a breech baby considered high risk? Unfortunately, like most aspects of pregnancy, the answer isn't as black and white as you probably hoped.

More Like This
Lightning Crotch Can Actually Tell You These 7 Things About Your Pregnancy
Pool Cannonballs Are Pretty Much A No-Go During Pregnancy
Could Increased Anxiety Mean You'll Go Into Labor Soon? Experts Explain
Your Guide To Swimming Postpartum

By definition, a baby is breech when their head is facing up in the uterus and their feet (or bottom) is pointed down. Typically, around 30 weeks, your baby should turn to face head down in preparation for delivery, according to New Kids Center. But in breech pregnancies, for largely unknown reasons, this doesn't happen.

Though this seems scary, Fit Pregnancy noted that only about four percent of pregnancies are breech at full term, which doesn't necessarily deem it a high risk situation. There are certainly risks associated with breech babies, but according to American Pregnancy, most breech babies are born healthy despite the slightly elevated risk of health defects. The risks, however, are generally associated with injury during delivery, because of the difficulty of delivering a baby in a breech position.

So how does the delivery go down? According to What To Expect, the majority of breech babies delivered via C-section, where things should go smoothly. But, as the site noted, the risks seem to rise during vaginal births, with the most common complications being umbilical cord prolapse, injury to baby's skull or hips, difficulty birthing the head, and increased risk of perineal tears or episiotomy for the mother.

All in all, you can't deem every breech pregnancy as "high risk" there are certainly risks involved. If your baby is breech, talk with your health care provider to determine the best course of action. Many times, with the help of a doctor or using a home remedy, breech babies will return to the ideal position before you are full term.