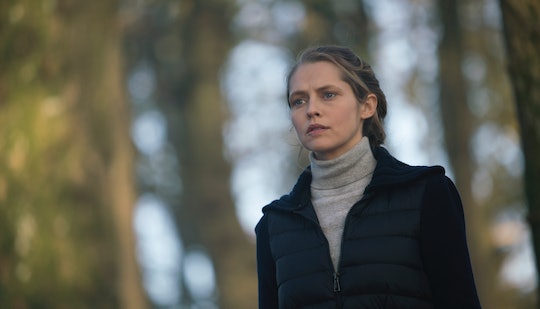 If you're a contemporary fantasy fanatic, you may already have A Discovery of Witches both on your TBR pile and scribbled in your calendar for the premiere today on AMC. That's because the hit All Souls trilogy by Deborah Harkness turned BBC show turned American series is happening — soon. But even if you're a fan, it doesn't mean the show is for everyone. As a mother of two littles, I can relate to accidentally stumbling onto adult-only content when they're around. So is A Discovery of Witches is appropriate for kids, or should you save it for after hours? This one isn't clear-cut.

According to Common Sense Media, A Discovery of Witches *may* be OK for older tweens, and more mature teens, ages 13 and up. Otherwise, it's probably best to DVR and watch when the kids are in bed. With a dramatic tone of the content in the series includes "intermittent violence," slight gore (vampires and blood, oh my!), mild language, and references to sex (with one reviewer saying there are a couple sex scenes, but in PG-13 form) it honestly depends on your lifestyle and what you're comfortable letting your kids see. Basically, it sounds like A Discovery of Witches is much like anything else on TV. If you have any doubts, watch it before the kids so you know what's involved. Actually, Daily Mail said the series is "aimed squarely at grown-ups," so take that and run with it.

For both the first book in the series — of the same name — and the show, the story is mostly the same. In fact, they stayed true to the heart of book one, as told by Express. Whether you've read the books or not, let me give you a refresher on the story before you dive into the premiere. A Discovery of Witches follows academic and historian, Professor Diana Bishop (Theresa Palmer) researching alchemical manuscripts — she also happens to be a witch, but refuses to acknowledge or accept that part of her. Living in a world with demons, vampires, and witches who live in plain sight, Diana's bound to find herself twisted up in some kind of mystery. It's not until she discovers an illusive manuscript in the Oxford Bodleian Library when her story really begins.

Of course, there has to be a love interest. Diana's comes in the form of biochemist and neuroscientist, Matthew Clairmont (Matthew Goode), Fellow of the Royal Society, with one important caveat: he's a vampire. Diana and Matthew work to unravel the mysteries of the long-lost manuscript called Ashmole (complete with occult messages protected by magic spells) while maybe, probably, falling for each other — except, witches and vampires aren't exactly BFFs. This all takes place in the first season, which is eight episodes, but the show was picked up for two more seasons to fulfill the content in the remaining books.

Another thing to note: some of the filming is on a set crafted by mega-talented people, but some of it is on-location in Oxford, Venice, parts of South Whales, and even parts of the inside of the iconic Bodleian. So if your teen watches A Discovery of Witches with you, it might count as some form of Social Studies or Geography homework. Just sayin'.

Maybe A Discovery of Witches isn't something you'd show your 7-year-old (sorry, sweetheart), but if you have older kids that can handle the mature content and visuals, maybe. Again, use your parental judgement or give it a watch first. It's not hard; just common sense.