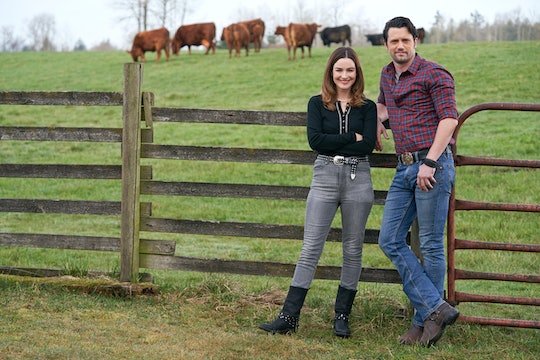 'A Feeling Of Home' Is A Hallmark Classic In The Making

Hallmark's A Feeling of Home pulls its protagonist Abby in two different directions: she's torn between her new life in New England and her home town in Texas. It's a familiar tale, especially in Hallmark movies, but is A Feeling of Home based on a true story?

There's no indication that there was any real life inspiration behind A Feeling of Home. The synopsis makes it sound like a typical romantic comedy. Abby hosts a web series in New England that's about to spawn a line of home products, but her goals are interrupted by her family calling her home. She's a Texas native, and must return to the ranch her dad runs to help him out. And quelle surprise — once she gets there, she finds out her ex-boyfriend Ryan is the ranch manager. Who could have ever seen that coming? Abby has to choose between the life she's built for herself on the East Coast or the one she left behind. The movie stars Jonna Walsh and Nathan Dean Parsons, and will premiere on the Hallmark Channel on May 11.

If the story is giving you stirrings of déjà vu, then it's probably because you've seen similar romantic comedies before. Hallmark has certainly dipped into this well before, but this particular movie also has a lot in common with the plot of Sweet Home Alabama (minus one new fiancé). These are popular tropes, but they're not ripped from the headlines.

I'm sure there have been cases in the history of the world where women moved away from home, started businesses, and moved back. They may have even fallen in love along the way. But it's more likely that A Feeling of Home is revisiting ideas that have been used in other stories. Romcoms do that all the time, even if they're not direct remakes. How many times have you seen old flames reunited, best friends falling in love, or dramatic airport confessions? There are certain ideas that wind up sticking around, and falling for your ex on a ranch is one of them. Give or take the ranch.

The stars of the movie do have a personal connection to it, though. In a Behind the Scenes video about the making of A Feeling of Home, both Walsh and Parsons talked about why they felt a particular attachment to this story. "What excites me about this project is being able to be from Texas," Parsons explained. "I grew up in Texas." He enjoyed talking about barbecue and working with animals — which was something Walsh appreciated, too.

"I actually did work on a farm when I was a kid," Walsh said. When she told her mom about working on the movie, her mom replied, "This is you! You grew up smelling like a goat." So while a true story didn't serve as the basis for A Feeling of Home, it does have some real life resonance for the actors who are starring in it. Perhaps that'll give it a little boost of authenticity.