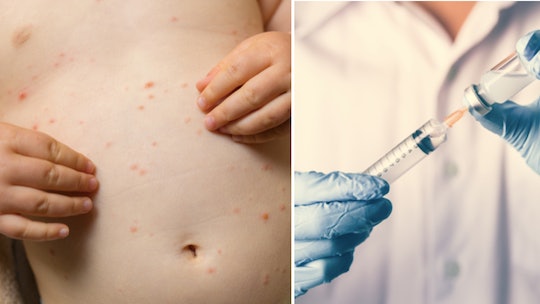 Does The Measles Vaccine Protect You For Your Entire Life? Here's What To Know

As outbreaks of measles continue to spread across the United States, some areas are getting firm about prevention measures. New York Mayor Bill de Blasio, for instance, declared a public health emergency on April 9, requiring people in some zip codes to get the vaccine or pay a fine of up to $1,000. But how do you know if you need the vaccination? If you were vaccinated as a child, you may be wondering if the measles vaccine is good for life. So, here's what you need to know to ensure you and your family are protected against the infectious virus.

The U.S. Centers for Disease Control and Prevention (CDC) recommends that everyone get the MMR vaccine — which stands for measles, mumps, and rubella — early in life for best protection. The CDC recommends the first dose at 12 to 15 months of age, and a second dose at 4 to 6 years of age. Parents could also opt for the MMRV vaccine, which also protects against varicella, commonly called chickenpox.

With the two doses, that protection will last for life in 97 percent of people, according to the Mayo Clinic. Even when people only receive one dose of the vaccine, 93 percent "develop immunity" to the disease, according to the Mayo Clinic. If you received the two recommended doses as children, the CDC says you are "usually considered protected for life and don’t need a booster dose."

Melanie Butler, RN and founder of Nurses Who Vaccinate, tells Romper that while the "MMR vaccine has been shown to provide protection for most people" who've gotten the two recommended shots "for more than 20 years," there are "exceptions" to this, which is why it's important to speak with a trusted healthcare professional. Butler says, "People should always talk to their healthcare provider to verify their vaccination status."

Many adults, of course, may have lost track of their vaccination records over the years, so how do you know if you’re protected? A simple blood test can show whether your body has developed immunity to the disease, according to the Mayo Clinic. If the test comes back negative, doctors will likely recommend that you get the vaccination, even if you’re an adult.

But why is it such a big deal? The U.S. has an advanced health care system, so can’t measles just be treated like any other illness? It’s actually a much bigger concern than most people think.

The European Centre for Disease Prevention and Control (ECDC) explains that measles can’t be treated directly through antibiotics, only symptoms like a high fever can be addressed. The disease can affect every organ system, including ear infections, diarrhea, pneumonia, and encephalitis, or swelling of the brain, according to the ECDC. So it’s not something to be taken lightly.

So far in 2019, according to the CDC, there have been at least 555 cases of measles identified in the United States, which puts this year on pace to be the biggest outbreak in modern history, as USA Today reported.

And it’s a hardy virus; Vox explained that a person could cough in a room and hours later the virus could still be alive through droplets in the air. Before the vaccine was discovered in 1960, about 4 million people came down with measles every year in the United States, resulting in 48,000 hospitalizations and 500 deaths.

Though the CDC effectively declared that measles had been eliminated in the United States in 2000, around the world it is still active, according to the World Health Origination (WHO). Even Europe hasn’t been able to entirely wipe it out, according to the ECDC. That’s why U.S. residents are routinely recommended to get the MMR vaccination if they’re going to be traveling internationally and aren’t sure they’ve had one. According to the CDC, this most recent measles outbreak has been linked to travelers who brought measles back to the United States from other countries.

When it comes to health, the best defense is prevention. And for the quick pain of a blood test, it’s easy to know if you’re protected against what can be a very serious and sometimes deadly disease. With all this said, talk to your doctor to be sure you and your family are on the safe side in this concerning public health crisis.