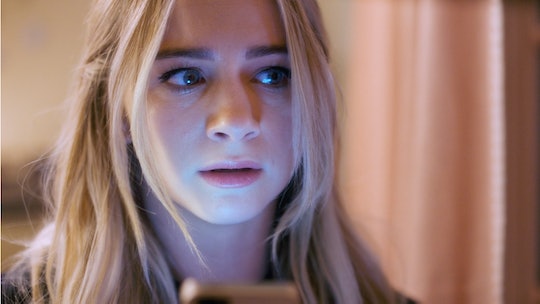 Lifetime is celebrating summer with its "Summer Escape" series, featuring all-new original movies each week this month, along with more new titles in July and August. They're the sudsy, steamy, salacious fare that have come to be synonymous with the Lifetime Movie Brand (TM), and so this new crop of TV movies, premiering every Sunday, are likely to be the perfect guilty pleasure this summer, just as the title "Summer Escape" suggests. With the third installment of the series premiering this weekend, viewers may be wondering: is A Night to Regret based on a true story? While it has a very ripped-from-the-headlines feel to it, the movie doesn't appear to be based on any one true story.

The film follows two childhood friends, Chelsea and Milla, who have reunited in college after growing apart. Milla has ventured into camming and, after she slips something into Chelsea's glass of champagne (though Chelsea knows about it), Chelsea inadvertently winds up on Milla's cam stream. A man tuning in proceeds to become obsessed with Chelsea, tracking her down, stalking her, and eventually kidnapping her. Milla, Chelsea's parents, and detectives race to piece together what happened to her before it's too late.

This isn't the first time Lifetime has featured a storyline in this realm. Back in December, it premiered Web Cam Girls, a film with a very similar premise, except the two girls at the heart of that story are in high school. But it's the same idea — one goes missing, race to find her before she gets murdered, etc.

Web Cam Girls wasn't based on a true story, either, but the formula clearly works for the network. A Night to Regret stars some actors with a built-in fan base, too. Marguerite Moreau, of Wet Hot American Summer fame, plays Beverly, Chelsea's mom, and she gets top billing on the film. Meanwhile, Chelsea is played by Disney alum Mollee Gray, who's best known for her work in Teen Beach Movie, Teen Beach 2, and High School Musical 3: Senior Year. This is Gray's second Lifetime movie after appearing in one called Double Daddy back in 2015. (That compelling premise was about a high school student who impregnates two girls at the same school at the same time.)

Although A Night To Regret relies on sensationalized tropes about the dangers of sex work, camming is actually one of the less risky, more autonomous forms of sex work. "Webcamming gives women the opportunity to reclaim profits from the traditionally male-dominated pornography industry," PhD candidate Rachel Stuart writes in an op-ed for The Conversation. "What’s more, they can maintain control of their image and dictate the terms and conditions on which they are viewed — all from the relative safety of their own homes. Indeed, webcamming allows individuals access to global markets, which could give women in deprived areas a chance to raise themselves out of poverty."

And a quick google search turns up plenty of interviews with sex workers who praise camming for its low barrier to entry, community vibes, and entrepreneurial potential. Being in complete control of how their sexuality, emotional labor, bodies, and other assets intrinsic to sex work are commodified puts the power squarely in the sex worker's hands and camming is one of the easiest ways to reclaim that power.

A pearl-clutching tale of how an innocent college co-ed is preyed upon following an accidental foray into camming is definitely not the most realistic or common sex worker experience, but realism isn't really what you're tuning into a Lifetime Movie for, right? You can catch A Night To Regret when it airs on June 24.