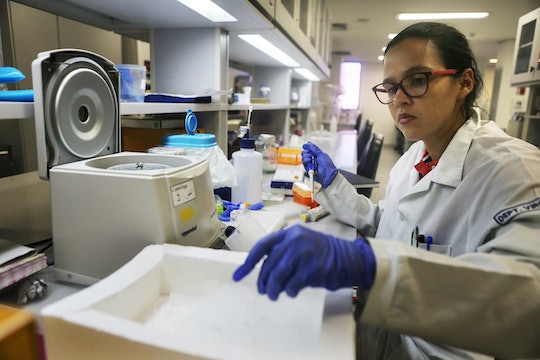 Is A Runny Nose A Zika Symptom? Americans Are Preparing For Zika's Spread

According to the Centers for Disease Control, there have been 820 reported cases of the Zika virus in the United States, 11 of which were sexually transmitted. As of its last report in late June, there have been no recorded instances of local transmission by mosquitos in the continental United States. Besides the sexually transmitted cases, all others have been linked back to foreign travel. Still, the threat of a local epidemic is serious, especially in southern coastal states where mosquito populations are rampant. But, how can you tell if you've been infected with the virus? Is a runny nose a Zika symptom?

The risk of contracting Zika is the greatest for pregnant women because of the virus' ability to cause life-threatening birth and developmental defects. Since researchers have begun tracking and studying Zika, the CDC has confirmed the link between the virus and microcephaly — a condition where the baby develops an abnormally small head. The CDC is monitoring the pregnant women in the United States who have been infected with the virus, but even so, they have not been able to determine the likelihood of Zika affecting a baby in utero, according to CBS News. One of the few certainties is that mothers and their babies are most vulnerable and most susceptible to dangerous complications from the Zika virus during the first trimester of pregnancy, so watch for symptoms during that crucial period.

Barring the cases of sexual transmission, the CDC reported that the virus is most often carried by infected Aedes mosquitos, which bite day and night. When one is bitten by an infected mosquito, they may take up to two weeks to show symptoms. Symptoms do not include a runny nose, but instead appear flu-like in nature. According to the CDC, symptoms of Zika can include a rash, pink eye, sore muscles and joints, and a fever. They are usually mild and last up to a week. But, that said, the symptoms can be dangerous for those with weakened immune systems, like the very young and the very old. Everyone should seek testing if they show symptoms, but few will require hospitalized treatment. The good news is that once someone is infected, they've likely developed an immunity to the virus.

Given how quickly the Zika virus can mutate, there is a lot of gray area surrounding its symptoms. So far, there have been four cases in the United States of someone infected with the virus developing Guillain-Barré syndrome, according to the CDC. The condition is rare and leads to dangerous neurological damage, though the link between Zika and this condition still poses questions for researchers. So, though Zika's symptoms can seem mild, the spread of the virus can have devastating effects for vulnerable members of the population.

There is still no vaccine for the Zika virus. The best plan of action is to seek medical attention if you have flu-like symptoms (especially if you have traveled to a Zika-affected country recently), rid your home of potential mosquito breeding grounds, and use insect repellent, mosquito nets, and screens to keep yourself safe from the virus's main carriers.