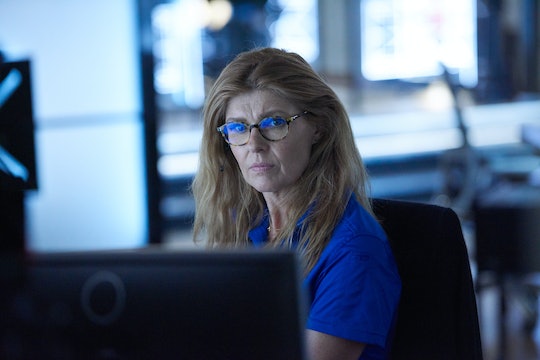 If you love cop dramas as much as I do, you'll be very excited about FOX's new series, 9-1-1. The show, created by Ryan Murphy and Brad Falchuk, follows the lives of first responders — cops, firefighters, and paramedics. However, it doesn't just look at the first responders, but also at the people who answer those 911 calls. One of those phone operators is Abby Clark, played by Emmy nominee Connie Britton. So is Abby Clark from 9-1-1 based on a real person?

Although the series may be based on real-life experiences that emergency responders have gone through, it doesn't seem like Abby is based on any on specific person. Rather, Abby is probably just a character inspired from many first responders experiences. Whatever the inspiration behind Abby, there's no doubt Britton will knock the character out of the park.

This marks the third project Britton has worked on with Murphy, after having appeared in his cable network series, American Horror Story and American Crime Story. This is Britton's first lead role in TV series since she exited Nashville earlier this year, though you may have seen her more recently on the new Showtime comedy SMILF, where she had a recurring role.

On 9-1-1, Britton's character, Abby, desires to know what happens to the people she speaks to after she sends the first responders out to help them. Perhaps Abby won't remain a phone operator throughout the series but will become a first responder herself. However, it's much too early to know for sure. What is clear from the series trailer is Abby is taking care of someone at home who looks very ill. Surely the first episode will explain who that person is to Abby and how dire their illness is; perhaps whatever led to that person being in a hospital bed is the same thing that led Abby to become a phone operator in the first place.

Starring alongside Britton in the series is Golden Globe winner Angela Bassett, who also appeared in American Horror Story, though not in the same season as Britton. Bassett plays Detective Athena Grant, who also has her own problems at home. Based on the trailer, she'll have some marital problems to face and will be juggling her job and raising her daughter.

Also starring in the new series is Parenthood alum Peter Krause as firefighter Bobby Nash. It seems like he'll be struggling with his sobriety, but thankfully he'll have a priest and his co-workers there to help him get through it. The series will also include Oliver Star (Into The Badlands), Aisha Hinds (Shots Fired), Kenneth Choi (The People v. OJ Simpson: American Crime Story), and Rockmond Dunbar (Prison Break) as series regulars.

Not only is this cast incredibly talented, it's also pretty diverse and will no doubt tackle some heavy topics over the course of its first season. Just like other procedural dramas, it will most likely cover a different case each episodes, which will also bring in new storylines and possibly guest stars.

9-1-1 definitely has all the makings to be a hit and it wouldn't be surprising if the show got renewed for a second season before the first season ended. Murphy and Falchuk have always been a dream team when it comes to churning out popular TV shows and I don't see why 9-1-1 would be any different. I, for one, can't wait to watch it. Thankfully, the wait is over as the premiere airs this week on Wednesday, Jan. 3 at 9 p.m. EST on FOX. You won't want to miss it!