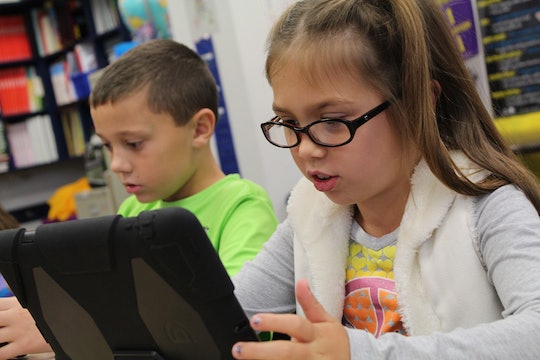 Can ABCmouse Help Your Kid Learn To Read?

When my son wasn't even 2 years old, I remember seeing ads for ABCmouse.com all over daytime television, purporting the app would "teach your child to read." I was skeptical. How could it possibly work that an app could do that? Is ABCmouse good for teaching kids how to read, or was it just a clever commercial? Of course, I signed up. I'm a classic type-A personality, and anything that wasn't Angry Birds seemed like a good idea.

More Like This
If A Tick's Head Gets Stuck When You're Pulling It Out, Here's What To Do
30 Cheap & Easy Summer Activities For Kids
Here's The Deal With Babies Who Sleep With Their Eyes Half Open
30 Vintage Photos Of Parents Giving Their Babies A Bottle

I was taught to read like many other people — on the lap of my grandmother who wore too much perfume. We read adventure stories and she attempted to make me learn to read Czechoslovakian children's books that my father never even learned to read. As we sat on her long ivory sectional, both of us in capri pants and loving every minute of it, I sounded out each word with painstaking slowness as she looked on with love and pride.

However, much has changed since the late 80s and early 90s, and my children's grandparents don't even wear perfume. When it came time for my son to start using the iPad (read: when I really needed a break and OMG please a moment of peace) I chose what I thought were the most educational apps. (Read: this has now also changed as he kills robots and watches kids play games on iPads on his iPad.)

However, a recent study at New York University found that yes, apps like ABCmouse can be effective learning tools for literacy. The researchers selected a group of kids from underperforming schools who were struggling with reading, and had them use the app for a period of weeks. The results were conclusive — it can work. They used a phonics program similar to ABCmouse called Homer, and saw a marked improvement in the students after six weeks of controlled, continuous use of the program.

But what about ABCmouse? Is ABCmouse good for teaching kids how to read? According to New York City Public Schools, it is. The New York City Department of Education issues a free membership to ABCmouse for all of its pre-k through second grade students, and many teachers make it a mandatory part of each student's homework. Both of my children were required to use it as a part of their daily work, and according to PR Newswire, they're just a part of a larger population. Over 65,000 classrooms and a full third of public libraries have started offering the program.

The librarians at the Highlawn Branch of the Brooklyn Public Library called ABCmouse "the gold standard" of phonics programs, touting its ability to work with English learners as well as native speakers, and its engaging online platform.

I wanted to be able to poo-poo ABCmouse and claim something against it, but with increasing evidence to its benefits, and watching how my own daughter went from a non-reader who just wasn't interested in reading to a girl reading above her grade level, I just can't. If nothing else, it's worth a try, and it may give you just a few moments of quiet time while they work out the puzzles on the screen.