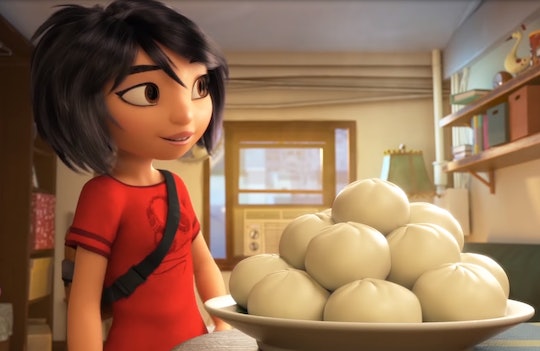 Planning A Family Movie Night? 'Abominable' Might Be A Hit Your Kiddos

A new animated feature film just hit theaters and parents may be wondering which of their kiddos will love it. Better yet, which of their kids is the right age for it. For example, is the new Dreamworks film Abominable appropriate for kids under 10? In this case, it looks like you can safely plan a family day out at the movies.

Abominable stars Chloe Bennet as Yi, a teenage girl in Shanghai who finds a young yeti on her apartment building’s roof, according to Common Sense Media. Taking a chance on befriending the scary creature, she realizes he misses his home on Mt. Everest and vows to get him home. Albert Tsai and Tenzing Norgay Trainor also star as Yi’s friends and partners in adventure.

Abominable is rated PG for some action and mild rude humor, according to IMDb. The breakdown of potential concerns includes three scenes of violence depicting weapons and/or physical assault; infrequent portrayals of peril to main characters; hand-to-hand and weapons violence with no blood and little detail; and infrequent portrayals of monsters and transformations with little detail, according to ParentPreviews.com.

Based on the trailer, though, Abominable shouldn’t cause issues for most children of all ages. Slightly older kids might more readily identify with Yi, as a teenager working through the grief of losing her father and longing for something more than her everyday, humdrum life, as IndieWire explains.

The film doesn’t seem to dwell on the grief aspect too much though, instead opting for lots of adventure and magic. Scenes of the three main characters gliding over the clouds and enjoying verdant highlands are richly drawn and gorgeous. Viewers are in store for a visual treat.

There is one scene at the beginning when Everest (the Yeti) breaks out of the holding pen an animal collector has him trapped in, wounding himself in the process, according to IndieWire. Even this sequence shouldn't present a real barrier to children, however. “Culton and her talented animating team strike a compelling balance here, capturing Everest’s fear and confusion without getting dark enough to terrify younger viewers,” IndieWire wrote in its review.

Abominable is a co-production between Dreamworks and Chinese production company Pearl Studio, and as such, it is offering one interesting option. Theatergoers have the chance to listen to it in Mandarin, using an app called TheaterEars, according to Forbes. Once downloaded, the app allows viewers to sync the movie audio to their headset and listen in another language.

Whatever language you choose to watch in, wherever you see this movie, it’s sure to delight kids of all ages. Just get ready to buy them their own stuffed Yeti when you leave the theater, because Everest is too cute for words.