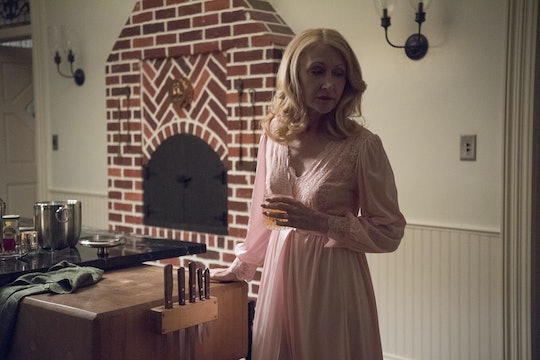 Adora Could Be A Suspect On 'Sharp Objects'

Every new episode of Sharp Objects proves that there's no end to Wind Gap's secrets. Just when you think you've heard every horror from the town's past, another one crops up to add to the list. The dark family history revealed in "Falling" cast an ominous light on Adora's already-creepy behavior, and may have pushed her to the top of the suspect list for the murders. But is Adora the murderer on Sharp Objects?

Technically, there isn't much specific evidence linking Adora to the deaths of Ann Nash and Natalie Keene. She was very close to the girls and tutored both of them, but the townspeople think that was a good thing and a sign of Adora's kindness. She was the charitable socialite taking the time to help two badly behaved little girls. Even Natalie's brother John thought that Adora was a good person because of her interest in his sister. But new revelations about Adora could mean that she was involved in Ann and Natalie's murders.

In "Falling," Detective Richard discovered that Marian Crellin had been in and out of hospitals for various illnesses that were never properly diagnosed. They ran the gamut from renal issues to heart palpitations. But the nurse on call at the time had an explanation: Adora suffered from Munchausen's by proxy, and she had made Marian sick so that she could get the glory of making her well again. But she'd pushed too hard and Marian died.

If Adora was capable of murder once before, then it's possible she could do it again. Throughout Episode 7, she was looking after a supposedly-sick Amma and feeding her all kinds of strange substances that only seemed to make her sicker. Adora was visibly excited to whip up her tinctures and concoctions, dancing a little in the kitchen while she ground up pills and dissolved them in colored liquids. The impulses she had with Marian have clearly continued with Amma. Adora is still abusing young girls, so there is a chance she did the same to Ann and Natalie.

If she had close relationships with them, perhaps she did abuse both Ann and Natalie as well. One of the girl's bikes was even found on Adora's hog butchering plant. That's the biggest piece of evidence linking her to their deaths at the moment, but it's also the most odd. If Adora was trying to hide the fact that she'd killed Ann and Natalie, would she really have left that bike on her own property, in a place where it's likely to be found and connected back to her? It seems a little obvious and more than a little bumbling for someone of Adora's secret-keeping skill level. She hid the true nature of Marian's death for decades, after all.

The method of the killings are also totally different. Marian's death looked enough like an accident that nobody questioned it, but Ann and Natalie weren't poisoned. They didn't waste away after being sick for months on end. They were violently attacked and strangled, with all of their teeth yanked out. That doesn't appear to be Adora's usual approach. Her cruelty is much sneakier and harder to detect from the outside.

John Keene was arrested for the murders after blood was found in his room, but Camille didn't believe he was guilty. Adora doesn't totally fit the killer's M.O., but she has killed before. If you've read the Gillian Flynn book that the show is based on, then you might already have your answer about the killer. But right now on the show, there's still no way to make a doubtless determination. All you can say at the end of "Falling" is that Adora seemed even more suspicious than she did before.