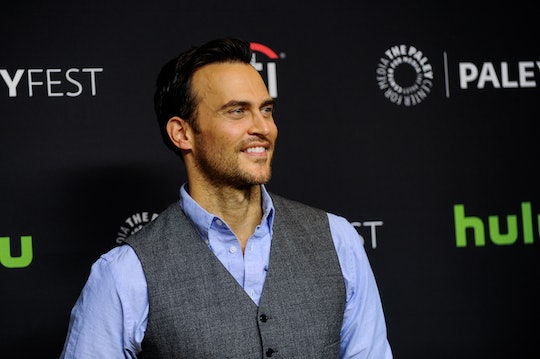 Is 'AHS: Roanoke' Changing Stories? There Is A Potential Shift

Perhaps the most surprising thing to happen in AHS: Roanoke Episode 5 – and this is saying something in an episode that contained cannibalism and a man being burned alive – is that it seemed to tie everything up. The story fans had been following appeared to come to an end when Matt and Shelby moved out of their haunted house. They escaped the ghosts, grabbed a motel room, and prepared to return to Los Angeles with their lives intact and a new crazy story to tell at parties. Their wild tale certainly seems to be done, but there are five episodes left in the season. Is AHS: Roanoke changing stories?

Series creator Ryan Murphy did announce a twist occurring around Episode 6 that would split the season into two distinct halves. But if Matt and Shelby's story is over, then what's next? The brief preview for Episode 6 showed Cheyenne Jackson talking directly to camera while he moved down what could be a hotel hallway. In previous episodes, fans recognized his voice as the man behind the camera doing the interviews, so it looks like the focus will be shifting to the behind the scenes crew who were filming My Roanoke Nightmare this entire time.

While that would be a twist, it's also a twist most people saw coming. The show spent so much time on its faux documentary that it seems natural to move behind the camera to explore that world more fully. If it was just about Matt and Shelby's haunted house adventures, then there would be no need to develop the entire doc format; AHS could have simply done a Murder House redux and been done with it.

Still, just because the show looks to be shifting its story to the crew of My Roanoke Nightmare, that doesn't mean every aspect of the twist is certain. There's no real way of knowing yet just what kind of journey the crew will embark on. Will they return to Matt and Shelby's house to investigate further? Will they become victims of the ghosts themselves? Most importantly (to me), will viewers get to see the reenactment actors out of character? Or get to see the real Matt and Shelby outside of the interviews?

Right now AHS has left fans with nothing but questions, but that describes the theme of the season much better than Roanoke does. Season 6 has been a mystery since before it began, so it's no surprise the confusion is continuing.