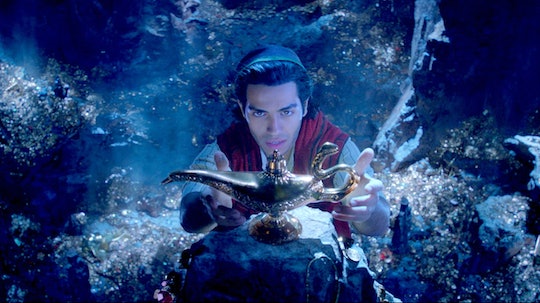 Is 'Aladdin' Appropriate For Kids Under 5? Here's What Parents Need To Know

One of Disney’s most beloved stories is returning to the big screen this weekend when Aladdin makes its live-action debut. But will this rendition of the film be suitable for the whole family or, more specifically, is Aladdin appropriate for kids under 5 years old? With most movies, a lot seems to ride on how sensitive your child is to certain things, so here's what parents need to know.

For starters, this is a live-action remake of the animated Aladdin that starred Robin Williams and came out in 1992. Common Sense Media rated the animated version as appropriate for kids 6 years old and up, based on some scary scenes, cultural stereotyping and potty humor. Though Common Sense Media has not reviewed the live-action version of the film, its reviewers do note that it could be more intense simply because we’re talking about human characters who are facing opposition.

The MPAA rated the new Aladdin PG for some action/peril, so it’s quite possibly appropriate for some 4- and 5-year-olds. If your child is one who enjoys a good chase scene and can get caught up in the magic of a story then I wouldn’t hesitate to take them to this film. If, however, your child is on the sensitive side — and I get it, because I was that child — with a tendency to hide their eyes when things get too intense, then perhaps sit this one out until they're a bit older.

According to CinemaBlend, the plot of this version of the film hews close to the original with a street urchin, Aladdin, who is trying to make his way in the city of Agrabah. He meets Princess Jasmine, who wishes both to be able to see the world and to marry for love, not status. Meanwhile, schemer Jafar recruits Aladdin to enter a somewhat scary cave to retrieve a magic lamp; Aladdin does get the lamp, but keeps it for himself and calls out the genie.

This time around the genie is played by Will Smith in a role that got the internet talking following the release of the trailer, according to USA Today. Smith first appeared in costume on the cover of Entertainment Weekly and in an Instagram post he assured fans that he would, in fact, be blue like the animated version of his character. As USA Today put it, "They didn’t know how blue."

Once the trailer revealed Smith in all his blue glory, people seemed to think was waaaaay over the top

Nonetheless, from the trailer, Smith’s genie seems to hold the same wise-cracking charm Robin Williams beloved character did, so perhaps we’ll get used to seeing him in all his cerulean glory.

When it comes to discussing the larger subjects displayed within the film with your children, Krista Andberg, a licensed clinical social worker, has some interesting ideas. On the website for author and culture critic Rebecca Hains, Andberg presents ideas for topics to talk to your kids about, like cultural stereotyping and princess portrayals and provides suggestions for questions and topics that you can present to 4- and 5-year-olds, and 6- to 8-year-olds. It’s certainly an interesting concept to take a popular Disney creation and use it to help kids develop critical thinking and media literacy skills.

With all this said, for kids younger than 5 years old, it seems whether or not to see it is up to parents' discretion. You know your kids best, of course.

The 2019 version of Aladdin — which also stars Naomi Scott, Mena Massoud, and Marwan Kenzari — hits theaters on Friday, May 24.