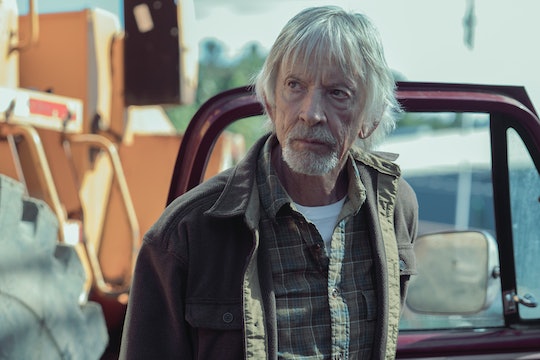 It can be shocking when a main character dies on TV show, but on Castle Rock, death seems to come with the territory. In the latest, most terrifying episode of the season, you see Ruth Deaver (Sissy Spacek) drift in and out of reality, all while trying to escape The Kid. In a panic, she shoots her gun at a blurry figure who looks to be her beau, Alan Pangborn (Scott Glenn). But is Alan dead on Castle Rock?

Warning: Spoilers for Episode 7 of Castle Rock ahead!

Unfortunately, it looks like Castle Rock’s longtime sheriff is now on the cursed town’s growing list of victims. At the end of “The Queen,” Ruth realizes that she has mistakenly shot Alan, and crawls to him as he takes his last breaths. In tears, she lays her head on his chest, and and then emerges from the barn in the morning. She calmly walks into her house, showers off his blood, and gets dressed. But when Alan rings the doorbell, she seems to go back into her memory of the time he returned to town to reconnect with her.

While the episode ends with Alan’s death, it begins as a flashback to what happened between Ruth and The Kid in Episode 6, right before Alan arrived to find The Kid sitting bloodied outside Ruth’s home. Once The Kid comes into Ruth’s house, you see her going in and out of her memories. It seems as if The Kid has somehow channeled Reverend Deaver’s spirit, because he is telling her things only her husband would know.

As she drifts between realities, Ruth uses her carved wooden chess pieces to pull her back into the present. She manages to kick her grandson Wendell out of the house for his own safety, and when she turns Molly away from the door, Ruth confesses that she wanted her husband to die and is now trying to make sure he stays dead for good. Eventually she makes her way to the barn outside, loads her gun, and then shoots Alan (thinking it's The Kid) when he comes in to find her.

But because Castle Rock is inspired by the supernatural world of Stephen King, fans are theorizing that there could be more to the story. Reddit user eldar777 thinks that there is more to the timing of Ruth getting her chess pieces from Alan, and that the whole thing could be a time loop. “Alan bought Ruth the chess figures, but in the last scene when he comes to her after 14 years the pieces are already there. so it must be a dream or some kind of a time travel,” the user wrote.

Another Redditor, RockyHorrorPictureHo, connected a small detail from an earlier episode to the time travel theory. “Alan tells Henry in the first episode that someone called him, telling him that they heard shots by Ruth’s so he checks on her and she begs him never to leave her,” wrote the Redditor.

This is the same scene shown after Alan dies, which had Reddit user JudgeHoIden asking “Okay so he originally came back to the house because someone called about gunfire, but there was no gun was fired until in the future so does that mean there is some legitimate time travel element?”

While it looks like Alan is really dead on Castle Rock, there is always a chance that he comes back. Don’t forget that Ruth once said in Episode 5 that “nothing stays dead in this town," with time travel and resurrection playing a huge part in King’s universe. Fans will just have to wait and see how things pan out for this deadly town, and hopefully they'll get the clarity and answers they've been anxiously waiting for.