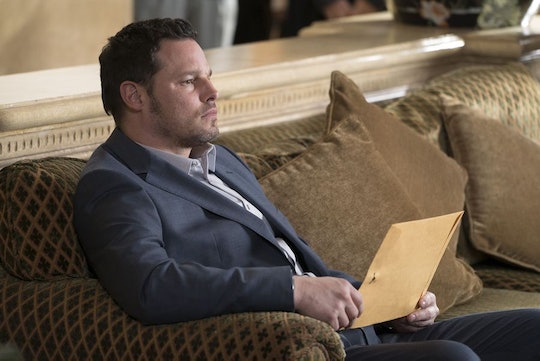 Alex Is On A Mission On 'Grey's Anatomy'

It's been a while since Jo's abusive husband has come up on the show, so some fans may have forgotten he even existed — but there's a few people who certainly haven't. Besides Jo, Alex and DeLuca (both of whom are in love with her), know Jo's ex is bad news and it looks like one of them may finally be doing something about it. So is Alex looking for Jo's husband on Grey's Anatomy? If he is, Jo probably won't be happy about it.

At the end of Thursday night's episode, Alex called someone, presumably his lawyer since he made sure to let them know he's not in trouble and asked if they could help him find someone. Alex then proceeded to give them some information that viewers weren't privy to hear. It definitely seems likely that Alex is looking for Jo's husband, but why would he decide to look now? It's been months since she revealed the real reason why she was worried about testifying during his case and DeLuca dropped the charges against him. What would prompt Alex to try and find Jo's ex now?

It's hard to say. During the episode, Alex did make a risky call to go ahead and do surgery on a kid whose parents didn't want him to have surgery because they didn't "believe in that kind of intervention." Dr. Bailey later told Alex that he could end up in jail... again. Maybe those words are what struck Alex into action.

Whatever the reasoning, Jo certainly won't be happy if Alex really is searching for her husband. She put a lot of effort into hiding from him, going so far as changing her name and not even daring to get divorced for fear of him finding her. If Alex goes out of his way to find this guy, that'll just lead him back to Jo, and of course Alex would never let this guy put his hands on her. But what exactly is Alex's end goal here?

Presumably, it's to get the guy to sign some divorce papers. The whole reason Alex and Jo broke up was because she wouldn't agree to marry him, which he later found was because she couldn't. That isn't to say that Alex is going to get this guy to sign divorce papers just so he can propose again. It's more likely that he just wants to do this one thing for Jo and free her from the man who has had control over her life for way too long.

Whatever the reasoning, I just hope this doesn't blow up in Alex's face. He's gotten into enough trouble this season, he doesn't need anymore.