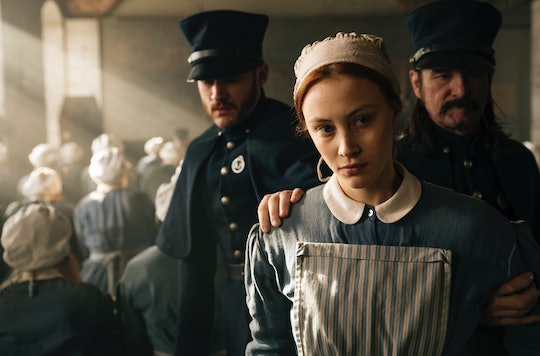 'Alias Grace' Is An Intriguing Blend Of Both Fact & Fiction

Alias Grace tells the tale of a young Irish immigrant named Grace Marks who was found guilty of the murders of her employer and his partner in 1843. The trailers released by Netflix hinted at the complexities of the case, but is the compelling account also a real one? Is Alias Grace based on a true story? The answer to that is yes but also kind of no: the miniseries is based on a Margaret Atwood novel of the same name, which is a fictionalized take on very real circumstances. There was a real Grace Marks who was found guilty in a real murder case, but the way the book (and show) tell her story may be tinged with fiction. The series that premiered on Nov. 3 is not a documentary by any stretch, but that doesn't mean it's wholly inaccurate either.

One of the biggest departures from reality was Atwood's creation of a character named Simon Jordan, a psychiatrist (known at the time as an "alienist") who began to interview Marks and fell for her in the process. Through these interviews, the story of Marks' life came out: her difficult childhood, her immigration to Canada from Ireland, her life as a servant, and finally the crimes that brought her to the public's attention.

Marks came to Canada when she was only 12 years old, and the journey was an immensely difficult one: while on the ship that would take them from Ulster, Ireland to their new home, Marks' mother died and was buried at sea. She arrived on land with her father, an abusive alcoholic, and her siblings; at some point after that, she entered employment at the house of farmer Thomas Kinnear.

Kinnear was one of the victims in the murder case, along with his housekeeper and mistress Nancy Montgomery. Marks was 16 years old when the crimes were committed, and there was a lot of public debate as to how deeply she was involved in what happened, particularly because she had a partner in crime. Stable hand James McDermott (who was just 20) was also convicted of killing Kinnear and Montgomery, so some believed he had led Marks into it. The truth remains unclear even now.

McDermott was sentenced to death and hanged, but Marks received life imprisonment. She spent 30 years behind bars before she was pardoned and released. She left Canada for New York and was never heard from again.

Grace Marks had fascinated Atwood for years by the time she wrote Alias Grace. She embraced the uncertainties of the case by making Grace an unreliable narrator whose testimony to Dr. Jordan can never be assumed to be the complete truth. At a screening of the first two episodes of the miniseries, Atwood said, "There were so many different, contradictory stories about Grace Marks; nobody actually ever knew whether she had killed anybody or not. There were four people in the house. Two of them were murdered, the third one was hanged and she was the one left. And she never told."

Though Atwood stuck to the truth as much as she could with so much of the story unknown, there were also fictional elements integrated into the novel besides Dr. Jordan. Spirituality played a part in the story, too. The third act involved Grace being put into a trance to try and spark memories of the day of the murders, because she claimed she fainted and had no idea what happened. The miniseries may incorporate these parts of Atwood's novel, moving it a little farther from the truth.

But the whole point of the Grace Marks case is that it's impossible to know what the truth really is. The murders are the vehicle that allow the story to explore bigger themes, but no one will ever be able to know exactly what happened that fateful day.