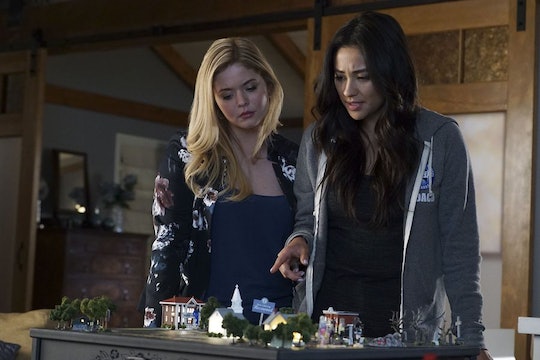 It looks like a popular fan theory might have just come true on Pretty Little Liars. After Alison found out she was pregnant in Season 7, fans were quick to theorize that the situation was even more complicated than it seemed on the surface. Emily had donated her eggs ages ago but they were stolen by A.D., so fans began to wonder if Alison was pregnant because Emily's eggs had somehow been implanted into her uterus. In "Power Play," A.D. revealed that they had actually done just that. But can A.D.'s information really be trusted? Is Alison carrying Emily's child on Pretty Little Liars?

It was finally Alison's turn to play Liar's Lament in "Power Play" and her task was to add items to a registry at a baby clothing store, which was especially cruel considering Alison was planning to terminate her pregnancy. There was more to the task than just emotionally torturing Ali, however. When she was done, the clerk handed over an item that A.D. had specifically set aside and mentioned that it had been personalized for the egg donor. Alison was understandably confused, but when she dug into the package, she found a necklace that looked just like Emily's old beaded bracelet. It looks like A.D. really did impregnate Alison with Emily's eggs.

Though the theory had gained quite a lot of popularity online, it seemed almost too crazy to be true, even on a show with plot twists as wild as Pretty Little Liars. It was cruel and invasive enough for Alison to find out she was carrying the fetus of her abusive con artist husband, but discovering both she and Emily had been violated by A.D. in this way was especially horrifying. Though the reveal might not have been surprising for many fans, the fact that the show actually went there was enough to leave anyone reeling.

At first Emily was doubtful about the veracity of A.D.'s claims. After all, they had no concrete way of knowing it was true without a DNA test. But Alison was able to confirm the truth because she remembered undergoing the procedure while she was confined to the institution, and she knew it wasn't Archer who had orchestrated it. But what does A.D. hope to gain with this move?

If it's all about hurting the girls and putting them in awful situations, then mission accomplished. Still, it's difficult to imagine that that was A.D.'s only goal; it seems kind of pointlessly horrific without an ulterior motive. It made an already difficult situation even more nightmarish, and the reverberations are sure to be felt for the rest of the series.