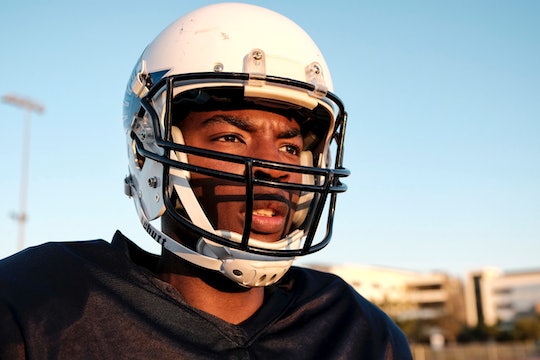 Here's The True Story Behind 'All American'

One of The CW's most anticipated new fall dramas is a flashy teen soap that asks the question: what if Friday Night Lights but Taye Diggs as Coach T? Yes, it's a high school football drama, but instead of being set in Texas, it takes place in Los Angeles, juxtaposing the South Central struggles of Crenshaw with affluent Beverly Hills. And at the center of the story is a wunderkind forced to move between two worlds. So viewers tuning in may be wondering: is All American based on a true story? In fact, it is!

The drama was created by Reign alum April Blair, who stepped down as showrunner earlier this month and was replaced by Nkechi Okoro Carroll. It's based on the life of Spencer Paysinger, a 30-year-old Super Bowl champion who played for the New York Giants, the Miami Dolphins, the New York Jets, and the Carolina Panthers, and has since retired. His on-set nickname is "Real Spencer," according to Entertainment Weekly, and like All American's lead character Spencer James, Paysinger was also recruited from South Central LA to play for Beverly Hills High School. He serves as a consulting producer on the show, but admits that some parts are fictionalized. Said Paysinger in an interview with CBS's Boston affiliate, "It’s not 100 percent my story but the bones of it are truly accurate."

Spencer James, played by British actor Daniel Ezra, is the star player at Crenshaw High School, which falls victim to a drive-by shooting during a football game in the pilot. Beverly Hills Coach Billy Baker, played by Taye Diggs, happens to be in the stands scouting, takes notice of Spencer, and uses the shooting to convince him to transfer. Coach Baker grew up in Spencer's neighborhood and he argues that Beverly Hills is a safer school in addition to being academically superior. Spencer agrees but lands himself in a very wealthy academic environment, complete with all the culture shock that accompanies it.

"It’s easy to look at South Central and say, 'That’s a bad place,' and it’s easy to look at Beverly Hills and say, 'It will be a cakewalk,' but it just exposed me to a different set of problems," Paysinger told Entertainment Weekly in an interview. "Both sides relate to each other more than they think."

The show plans to tackle all the topical race issues you'd expect (yes, there's a scene where Spencer gets pulled over by the police), including an identity struggle from Coach Baker's biracial son Jordan, who also plays football for Beverly High. Poised to be a standout supporting character is Empire alum Bre-Z, who plays Tiana "Coop" Cooper, Spencer's openly lesbian best friend from Crenshaw High. When Spencer transfers schools, Coop loses her protector and struggles to cope in his absence.

Added Blair, "We’re going to talk about stuff like: Do black men need to leave their community and enter the white world to succeed? How does the community look at Billy’s character for marrying a white woman? There’s a lot of hot-button topics we want to talk about."

All American premieres on The CW Wednesday, October 10.