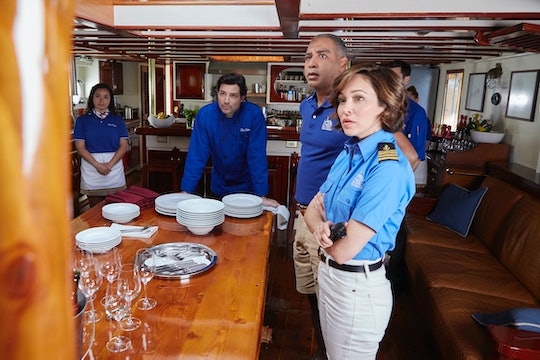 Ever gotten an exciting new job, then discovered it requires you to work super closely with an ex from 12 years ago? Has it ever happened to you while you were both working on a boat in the middle of the sea where you really can't escape? Are you, like me, wondering if Hallmark's All Summer Long is based on a true story? Because really this situation could either be a fantasy come to life or a total nightmare.

Well, while I suppose the movie does have some realistic scenarios, this particular Hallmark film isn't based on any one true story. It was written by Judith and Sandra Berg, who are no strangers to Hallmark. The duo have penned several movies for the Hallmark channel, including fun flicks like A Majestic Christmas, Harvest Love, and Love on the Sidelines.

It's no secret that Hallmark romantic movies follow a certain formula — and unlike in real life, the endings are always happy. By this time the Berg writers likely wouldn't need to look to real life events for inspiration. They know how to write a solid Hallmark channel script and Hallmarkies everywhere are grateful.

So now that we've established this movie as a work of fiction, what exactly happens in the plot?

All Summer Long follows Tia (Autumn Reeser) as she agrees to captain a a luxury yacht, owned by her aunt and uncle. Everything seems great until her ex-boyfriend, Jake (Brennan Elliott), is hired as head chef. Their relationship abruptly ended 12 years earlier, when each went their separate ways so they both could further their careers.

But now that their careers have brought them together, could all of this quality time lead to a rekindling of their romance? Problems with the boat threaten to compromise their jobs as well as their relationship, but the pair find a way to work through their differences and get the business up and running.

I don't know, something tells me these two kids will find a way to make it work in the end, both with the boat and with each other.

All Summer Long is part of Hallmark's ongoing Summer Nights series which, while not as well known as the network's Christmas movies, nevertheless all know how to deliver on the warm and fuzzies. The previous movie in the series was A Summer Romance which premiered on Aug. 17, starring Erin Krakow and Ryan Paevey. The series ends Aug. 31 with My One and Only starring Pascale Hutton and Sam Page. I wouldn't worry though, there are sure to be more Hallmark classics coming up in the next few months.

So no, All Summer Long is not a true story — but that doesn't make the happy hopeful feeling it'll give any less authentic. And hey, who knows, maybe there really are people out there who's lives turn out like a Hallmark romantic comedy. I'm hopeful that there are.

More Like This
The Best Movies Airing On Freeform’s 31 Nights Of Halloween In 2022
All The Nights Hocus Pocus Airs On TV In October 2022
'The Proud Family: Louder & Prouder' Is Returning For Season 2 On Disney+
The Office Halloween Episodes: A Definitive Ranking