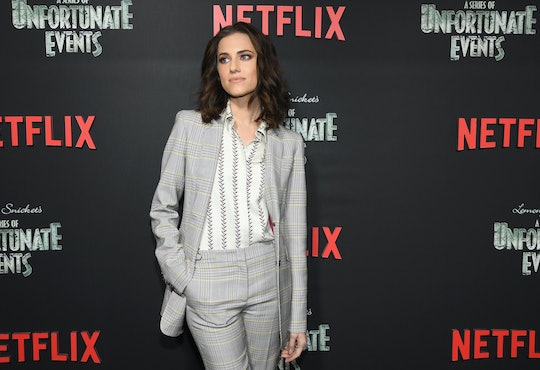 These Clues Could Prove Allison Williams Is Kit Snicket On 'ASOUE'

Warning: Spoilers for Season 2 and the book series! In the very last episode of A Series of Unfortunate Events Season 2, Allison Williams made a surprise appearance as an unnamed member of the secret organization known as the V.F.D. Next to nothing is known about the character Williams is playing, except that she's going to continue to be a part of the show in Season 3. However, despite having so little to go on, fans have already come up with a theory that Allison Williams is Kit Snicket on ASOUE — and it's a theory that makes a lot of sense.

But before one can determine if Williams is Kit, one has to know who Kit is (though her last name might give you a hint). She's never been mentioned on the show before, but book readers are already well-acquainted with her. She's Jacques and Lemony Snicket's sister and, like them, she tries to help the Baudelaires on their journey. But like many of the benevolent members of the V.F.D., Kit wasn't long for this world. In the final book, The End, she was poisoned by a mushroom known as Medusoid Mycelium and passed away, but not before she gave birth to a daughter named Beatrice. Count Olaf helped her during her labor in a surprisingly kind gesture, possibly because he might have been involved with Kit in the past.

Though Kit is a member of the V.F.D. and she's connected to other important characters, even book readers don't know a lot about her. The show could clarify Kit's story and give some additional context to what happens to her, much as it has done with other characters like Olivia Caliban. And it does seem nearly guaranteed that Kit will be joining the cast in Season 3 because the show hasn't deviated very much from the source material so far. According to actor Neil Patrick Harris, the plan is to stay close to the books. He told TV Guide:

"We've intentionally been very truthful and factual and loyal to the books. We've added a few characters that aren't in the books, we've added some songs that you probably couldn't put into the books, but for the most part we're sticking to the structure of what already worked."

Since Kit is a character in the books, fans can expect to see her in the Netflix series as well. But that doesn't necessarily mean that Williams is playing her. Williams could be a different character entirely, or even an original character like Mr. Poe's secretary Jacquelyn. But there are quite a few clues that Williams is Kit Snicket, making this theory one of the more convincing ones.

Williams' character had been in disguise as fortune-teller Madame Lulu at the Caligari Carnival, a position routinely held by V.F.D. members. When Williams left to snake the much-desired sugar bowl out of from under Esmé Squalor at Heimlich Hospital, Olivia Caliban took over as Madame Lulu. By the time Williams had returned, the carnival was in flames and Olivia was dead.

Even the details of Williams' return were possible signs that she was actually Kit Snicket. She drove up in what appeared to be Jacques' taxi cab while Lemony remarked in voice over that he didn't know the identity of the former Madame Lulu, but "reliable sources tell me it's a woman I know very well." It would make sense for Jacques' sister to acquire his car after his passing, just as Lemony is sure to know his sister very well. The whole family is part of the V.F.D., so all of it just seems to add up.

Then again, those tentative pieces of evidence could be disproved just as easily. Perhaps the cab simply travels amongst V.F.D. members regardless of whether they're related or not. Lemony probably knows lots of women. While it's plausible for Williams to be Kit Snicket, there's still a chance she's not. Viewers will have to wait until Season 3 of ASOUE to find out for sure.

More Like This
10 Parenting Lessons We Learned From Red & Kitty In 'That '70s Show'
Exclusive: Watch How A Group Of Princesses Save The Day In Netflix's New Animated Series
Three Adorable Wombats Learn To Solve Problems In PBS Kids’ New Show
Jinger Duggar Was Taught Motherhood Defined Her — & Then She Broke Free
What Parents Are Talking About — Delivered Straight To Your Inbox